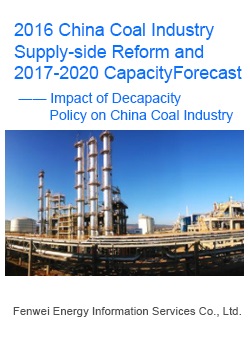 The 2016 supply-side reform of China coal industry, with focus on decapacity and 276 workdays, has brought significant changes on domestic coal landscape: over 300Mt/a of coal capacity closed, declining coal output and stock, soaring prices and higher-than-expected imports, which has attracted great attention of market players and observers both home and abroad, and they have expressed deep concerns for the effect and direction of China's decapacity policy.
In order to clear doubts of those that are interested in China coal market and show them the direction of China coal industry reform, Fenwei hereby produces this special study report on "2016 China Coal Industry Supply-side Reform and 2017-2020 Forecast", based on our proprietary coal mine capacity database, and expert conclusions and policy interpretation. The report will be presented in form of PPT.

1.1  Decapacity and reduction production based on 276 workdays aiming to resolve overcapacity and help enterprises out of difficulty

1.2  Local governments plan and measure for decapacity and rearranging production on 276 workdays

1.3  Strict control over newly-added capacity through capacity replacement(to replace small and outdated capacity with large and advanced capacity, with total capacity smaller than before)

2   Implementation Effect of Decapacity and 276-workdays Production in 2016

2.6  Rising price boosted mines to expand coal production, while frequent mine accidents occurred at year-end due to less safety input in the last a few years

3.2  Coal capacity by province(split by the mines being operated, under construction, completed and suspended)

3.3  Thermal coal capacity(split by the mines being operated, under construction, completed and suspended)

3.4  Coking coal capacity(split by the mines being operated, under construction, completed and suspended)

4.3  Continuous decapacity to exert limited impact on coal production given by serious overcapacity

4.5  Intensify supervision and safety inspection over mine production

5.3  Effective capacity by province(the capacity that is able to generate coal products)

6.1  China coal supply ability will not be interrupted by decapacity policy due to serious overcapacity

6.2  Decapacity does good to optimize industrial structure, phase out ineffective supply and speed up industrial upgrading

6.3  To help loss-making enterprises out of difficulty and increase profit

6.4  To promote scale development of both SOEs and private coal companies through enterprise regrouping

6.7  To present higher requirements for safety production and supervision