China's demand for coal is expected to peak by 2025, despite huge difficulties, in line with the government's "Dual Carbon" target, Feng Dongbin, deputy general manager of Fenwei Digital Information Technology, said at an industry summit on September 22.

China's arduous task from carbon peak to carbon neutrality in 30 years means significant change in energy production and consumption structure, Feng said at the Global Coal Market Summit in Guangzhou. The summit was held by Sxcoal, a coal industry portal operated by Fenwei.

China's President Xi Jinping had promised to reach carbon peak by 2030 and carbon neutrality by 2060.

While major economies, including the EU and the US, planned to achieve carbon neutrality by 2050, they have 37-60 years' time to do so as they had already reached carbon peak, according to Feng.

Coal is the major source of carbon emission in China's energy sector, with coal-related sectors accounting for 68% of the total emissions, predominantly from power and steel industries, which respectively taking 47% and 19%.

In the years ahead, coal demand in China will be persistently constrained by the government's "Dual Carbon" and energy policies, as iron and steel, coke making, cement and energy- and carbon-intensive industries would face growing restrictions in terms of production capacity, production, industry threshold and technologies.

Specifically, the demand of thermal coal, mainly for power generation, will peak by around 2024 before entering the downside trajectory, Feng said.

The demand of coking coal, mainly used for steel making, peaks much earlier than that of thermal coal. Fenwei's data showed China's demand of washed coking coal has been on the decrease since 2021. 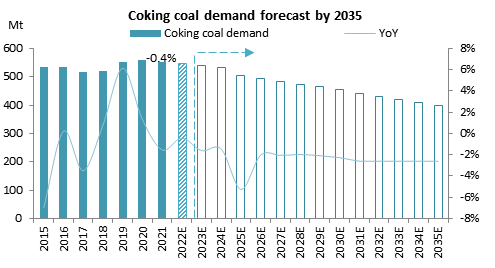 China's coking industry has planned to reach carbon peak before 2025, according to an action plan issued by China Coking Industry Association in August this year. Several large state-owned steel mills have already announced plans to peak carbon emissions by around 2023.

HSBC Holdings Plc will stop financing the expansion of thermal coal from funds it manages actively with immediate effect, Reuters reported, marking an acceleration of a broader commitment it made last

Russia plans to further increase coal exports to China by lengthening the existing two rail tracks and building another two tracks at Grodekovo-Suifenhe border port, according to media report and sour

Three quarters of the power generating units have been put into commercial operation in Baihetan hydropower station, following operation of a new unit on September 22, state media reported.

Indonesian thermal coal went higher amid a sparsity of available spot cargoes in the market and renewed purchases from Chinese buyers for fears of domestic supply reduction next month. Of

Coal production of Mongolia came in at 3.06 million tonnes in August, surging 143.01% year on year and 19.57% month on month, showed data from the National Statistical Office of Mongolia.

China had logged six-month straight rebound in coking coal imports to a new high of 6.41 million tonnes in August since the beginning of this year, according to customs data. The imports

China's demand for coal is expected to peak by 2025, despite huge difficulties, in line with the government's "Dual Carbon" target, Feng Dongbin, deputy general manager of Fenwei Digital Information T

China's domestic thermal coal prices jumped quickly over the weekends despite concerns over the government intervention as the market is high enough. The price rally was a little bit surp

The National Mine Safety Administration has sent a comprehensive inspection team to coal-rich Shanxi province to conduct week-long supervision during September 16-23, in an effort to ensure safety dur

Indonesia is struggling to roll out its plan to shut coal plants over the next 30 years as there were not enough potential investors to support its energy transition. In an interview last

Ordos, the largest coal producing city in northern China's Inner Mongolia, will cancel the "sales quotas" system from September 19 to accelerate the efficiency of coal transport as part of the drive t