Coal production of the 100 mines surveyed by Fenwei in Shanxi, Shaanxi and Inner Mongolia reached 11.26 million tonnes in the week ending June 29, up 25.5% year on year but down 0.7% month on month.

This was the first decline in June, as some mines cut or suspended production due to longwall changes and insufficient sales quotas around the end of the month.

Based on the surveys, these mines were estimated to have produced 48.3 million tonnes of coal in June, down 2.1% month on month. The daily output, however, still registered a 1.13% growth from May and 15.5% increase from a year ago.

Given the dominant role of key producing provinces, China's total coal production is very likely to see a month-on-month decline in June, while maintaining high growth on a year-on-year basis. 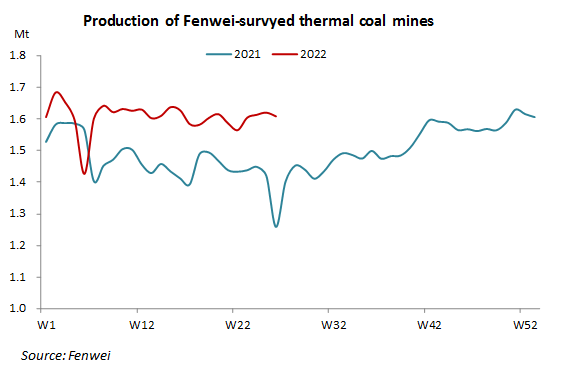 Average capacity utilization of these coal mines stayed at a high level of 93-94% in June, led by state-owned mines, with Shanxi mines still above 99%. A few mines even operated above their designed capacity.

Yet, capacity utilization showed a clear decline in the last week of June, mainly due to slowed purchases from end users and traders following the drop in the portside market. 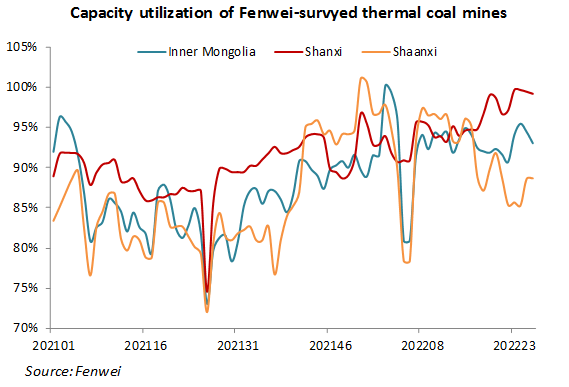 Accordingly, coal stocks increased 3.14% week on week to 3.09 million tonnes at these mines as of June 29. Over 60% of the mines surveyed kept prices unchanged from a week earlier, and more mines cut prices by an average of over 90 yuan/t, compared with a decrease of 45 yuan/t in the previous week.

Fenwei's survey on thermal coal mines is updated on weekly basis, and covers price, operating rate, stocks, production and logistics costs of each sample mine. If you wish to learn more about the dataset or take a trial, please reach us inquiry@fwenergy.com or +86 351 7219322.

China's thermal coal prices continued falling last week as coal consumption started topping out with the summer coming to an end, but the pace of decline slowed amid rising industrial activity. Partic

Thermal coal prices could rise again at northern China ports after falling on and off for two weeks, supported by improved outlook of the industrial activity. The benchmark 5,500 Kcal/kg

China's steel industry was stable as a while in the first half of 2022, but weakened in late months. This is reflected by following five facts. The first one is falling crude steel output

All the five workers trapped in a roof collapse accident at one Shanxi-based coal mine were confirmed deadafter being trapped for three days, state media CCTV reported on August 8.

Thermal coal miners in Ordos of Inner Mongolia saw reduced coal trucks since the outbreak of a new round of COVID-19 epidemic and related control measures have led to traffic jams. Trucki

Indonesia exported 43.47 million tonnes of coal in July, rising 17.96% year on year and climbing 7.39% from the preceding month, hitting the highest since at least January 2017, according to Kpler's c

Indonesia's state-owned power group PLN may suffer from coal supply tightness if no measures are taken to strengthen supply from domestic miners, who preferred to sell coal aboard rather than domestic

Mongolian coal exports grew drastically by 180% from the year prior to 666,300 tonnes over the week of July 22-28, Mongolian media reported. The volume mainly included 5,532 containers tr

China's coking industry has pledged to peak its carbon emissions by 2025 mainly through stricter emission controls and technological breakthroughs, according to a work scheme issued by China Coking In

China's thermal coal prices may extend declines in the remaining days of this month following the recent price fall, pressured by cooler weather and slackness in industrial activity, traders said.

Russia's seaborne coal exports totaled 15.7 million tonnes in July, marking a year-on-year decrease of 3.14% and down 6.19% month on month, according to Kpler's cargo-tracking data.