The sudden outbreak of COVID-19 in early 2020 has struck a heavy blow against the global economy, trade and investment. With effective control of the epidemic, China was able to quickly recover from the epidemic, with GDP growth rising from 2.3% in 2020 to 8.1% in 2021.

(1) The supply guarantee capability has been strengthened. From 2017 to 2021, China produced a total 19.1 billion tonnes of raw coal. Under the supply-side structural reform, backward coal mines were closed and production reduced in eastern and central regions, driving the center of coal production further to Shanxi, Shaanxi and Inner Mongolia.

(2) The "road-to-rail transport" campaign has accelerated.

In August 2017, the State Council proposed to change coal logistics at Bohai Sea ports to railway or waterway transport and lift the proportion of railway transport. Coal logistics was increasingly depending on railway, with coal railing volume growing from 1.69 billion tonnes in 2017 to 2.07 billion tonnes in 2021, or a CAGR of 5.2% during 2017-2021.

Major railways such as Haoji and Zhunshuo were built up, and dedicated coal lines such as Shenwa, Jitong, Huzhun and Dazhun were renovated. By 2021, rail coal delivery accounted for 56% in China. 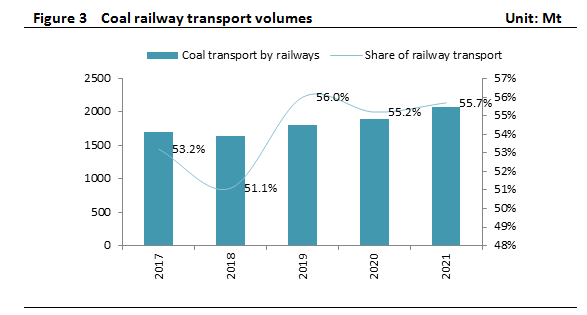 In the beginning of 2016, the State Council issued a document on resolving surplus capacity in the coal industry. In the same year, the industry's 13th Five-Year Plan was released. The plan clearly stated that around 800 million tonnes of outdated capacity would be eliminated and around 500 million tonnes of advanced capacity would be added through capacity replacement and layout optimization. From 2017 to 2021, the policy focus evolved from overall capacity reduction to systematic de-capacity and capacity structural optimization.

During this period, a total of 1.02 billion tonnes of coal capacity were phased out, exceeding the planned target. In the meantime, high-quality capacity was released steadily, with newly-added capacity reaching 500 Mtpa, and capacity structure was constantly optimized. In 2021, the scale of large-sized coal mines with capacity ≥ 1.2 Mtpa accounted for 75.4% of the total, 5.5 percentage points higher than the end of 2016.

(5) Imported coal has effectively supplemented domestic market. From 2017 to 2021, China imported 1.5 billion tonnes of coal from overseas countries, greatly alleviating domestic supply pressure. China imports coal mainly from Indonesia, Russia, Mongolia and Australia, combined accounting for over 87%. Indonesia has been China's largest coal supplier, with the proportion rising from 40% in 2017 to 61% in 2021. Russia's share also went up from 10% in 2017 to 17.6% in 2021.

China forged ahead energy revolution from 2017 to 2021, and the energy structure was optimized, forming a multi-purpose supply system. Clean energy development is leading the world, and energy transformation has accelerated. However, unbalanced and inadequate development remains a serious problem. Overall, China's domestic coal supply tightened during some periods of time and coal price volatility intensified from 2017 to 2021.

Looking ahead to 2022-2026, the adjustment of global energy structure will speed up; the utilization of clean energy such as wind, solar and nuclear will increase, and the global efforts to fight climate change under the Paris Agreement have embarked on a new path. In September 2020, China announced the goal of peaking carbon emissions by 2030 and achieving carbon neutrality by 2060. Coal will still be the main source in China's energy mix. What will be the trend of China's coal industry policy? Under carbon peak and carbon neutrality, how will China's coal industry structure develop? How will China's coal supply, transportation, imports and demand evolve? All these questions are worthy of in-depth research.

As an independent energy consulting company in China with long history and mature expertise, Fenwei has established professional research teams focusing on coal's upstream and downstream industries for many years, gaining a deep understanding of China's coal resources, coal quality and supply-demand fundamentals.

Fenwei is timely producing the long-term study reports on thermal coal, coking coal and met coke based on comprehensive data research, quantitative modeling and field surveys. We believe these long-term market reports will inspire you on coal/coke industry analysis & forecast.

The main viewpoints are as follows:

1) Coal's role and supply safety will be strengthened. Domestic coal supply is expected to stay high from 2022 to 2026, with cumulative output reaching 21.9 billion tonnes. Coal production continues to concentrate in Shanxi, Shaanxi and Inner Mongolia. The reverse distribution of coal supply and demand will become more prominent. As such, regional and periodical supply tightness will persist in China's coal market.

(2) The growth rate of energy demand is gradually slowing down. China's coal consumption is estimated to total 23.5 billion tonnes from 2022 to 2026.

(3) China will continue to boost railway and water-railway combined transports.

(4) The dependence on imported coal will fall in China. It is forecast China will import 1.4 billion tonnes of coal from 2022 to 2026.

Check this link for video introduction to these reports at https://youtu.be/Stc-qEbAkHo.

Indonesian thermal coal prices are under downside pressure as the market was muted with a lack of bids and offers after the Chinese domestic market started falling from the beginning of this week.

China's portside thermal coal market took a pause on June 24 after days of downward correction, yet thin trading liquidity remained in favor of further declines. On June 24, the prevailin

China's central province Henan produced 8.5 million tonnes of raw coal in May, up 3.2% on the year, and the total output declined 2.5% from a year ago to 40.56 million tonnesduring the first fiv

China's state planning agency approved 10 coal mines in Xinjiang to raise production capacity on June 13, to ensure the country's energy security, according to a report by Xinjiang Daily.

For a long time, China's thermal coal prices have been flying high while coal-fired electricity prices have been largely unchanged. Utilities, holding the responsibility to power millions of homes and

Australia may ban coal exports if necessary to ease the country's looming blackouts, according to a Financial Times report on June 17. The government of New South Wales asked coal miners

Australia's Queensland has announced plans to raise royalties on coal companies from July 1to earn revenues and fund investment in the state's healthcare sector, The Guardian reported.

Australia's Queensland government has announced to raise its royalties on coal from July 1 following a 10-year freeze, with the top tier increasing to A$300/t for 40% royalties charge from the current

The news that Germany approached Indonesia for thermal coal procurement in place of Russian imports has been reported with the fanfare, but does Indonesia have the ability to cover the "surprising" de

China's thermal coal imports in May hit the lowest level of the same month since at least 2012. Coal imports from Indonesia slumped on a monthly basis, while Russian coal delivery surged.

The Indonesian government will collect carbon tax from coal-fired power plants from July 1, 2022, as a trial run to roll out the carbon tax policy on all emission-intensive sectors. The c

Indonesia has no plans to enhance its coal output despite Europe's interest in purchasing from the archipelago as an alternative to Russia, according to a government official. "There is n

China's thermal coal prices are falling at a time when the heatwave drives up coal consumption to power more air conditioners at homes and businesses. Why does the downward correction take place?

The Mongolian Prime Minister required related departments to initiate the pilot test for unmanned cross-border coal delivery at Gashuunsukhait/Ganqimaodu before July 5, according to report from the co