China's coal imports were once widely expected to remain low in the following months when the General Administration of Customs (GAC) issued March imports data, yet the April figure went against the forecast slightly.

The coal import figure in April posted a large month-on-month growth, even though the growth from the year-ago level is relatively small. Compared with the imports for April in previous two years, the volume still presented an obvious increase. 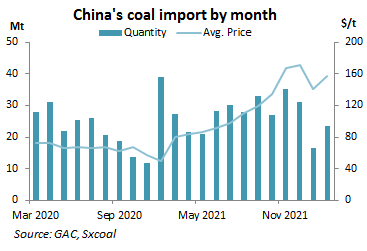 But on the other hand, coal demand surged.

Some developed countries that are in the process of de-carbonization were forced to have higher coal demand given high energy prices and supply shortage. This, coupled with exacerbated geopolitical relations, further tightened coal available worldwide.

Since the European Union included Russian coal into sanction earlier April, Poland, the U.S., the British and Japan have declared ban on coal imports from Russia. Though they decided to put off the effective timeline to mid-August, over one month later than the original plan, countries started to seek alternative sources for supply shortage of natural gas and oil.

Data showed European countries have imported 809,000 tonnes of coal from the U.S. in March, 1.3 million tonnes from Colombia and 287,000 tonnes from South Africa, sending the total coal imports surging 40.5% year on year.

But what exactly is the reason for the deviation of China's actual coal imports in April from the widely-agreed expectation?

This may be directly linked with importers' panic buying amid thick risk hedging sentiment and concerns over supply cutoff of Russian coal due to its conflict with Ukraine.

Impacted by buoyant prices and shortage of natural gas and crude oil, some countries have to increase coal consumption, and a large supply gap was left for them to fulfill after energy products from the largest energy producer Russia were banned. A scramble for coal accordingly emerged.

Chinese buyers once halted purchases of coking coal for potential settlement issues after western countries excluded Russia out of SWIFT system. But several Chinese buyers settled trades in RMB yuan in March, according to sources, but the overall volume is probably not big.

Chinese domestic users once also made panic buys for fear of coal shortage, which resulted in both year-on-year and month-on-month growths of China's coal imports in April.

But for now, the estimates of low coal imports in the near term still make sense, and that's why China streamlines customs clearance procedure in late-April and then tentatively lifted coal import tariff to have more coal imported.

Australia exported 12.45 million tonnes of coking coal in April, down 5% from the previous month, according to the latest Kpler's cargo-tracking data. Australia mainly exported coal throu

Major steelmakers in China's Hebei and Shandong requested to cut coke prices by 200 yuan/t as high raw material costs continued weighing on their profit margins. One leading steelmaker in

China's raw coal production in April failed to sustain upward trend and started to show weakness. The country produced 362.8 million tonnes of coal last month, posting a yearly growth of 10.7% but a m

More than 500 workers have been on strike for a week at a coal mine in Mozambique owned by a branch of an Indian group, Reuters quoted the company as saying on May 17, which dented coal production at

With exports rising to a record high and imports growing slower than expected, Indonesia's trade surplus reached a record high of $7.56 billion in April, official data showed on May 17. I

Thermal coal trades were dull at northern China ports on May 16, as traders reportedly dared not to sell at current prices that exceed the government's price caps. But offer prices kept h

China's leading coal consultant Fenwei has released mid-term reports for the Chinese coal and coke markets, elaborating on developments in the past years and presenting forecasts for the next five yea

China's domestic thermal coal showed signs of decline, as buying enthusiasm faded at northern ports in the wake of the government's pressing for serious implementation of price caps. The

Germany's largest power producer RWE has written off its long-term supply contract for Russian coal, resulting in a financial loss of around €850 million ($894 million), as the EU and the UK imposed s