Russia's coal exports dropped to a six-month low in September and declined for the fourth consecutive month, showed data from Energy Ministry of Russian Federation. 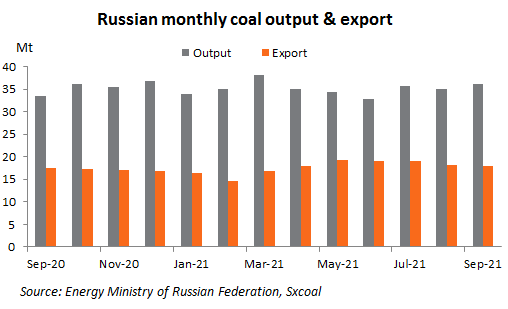 The country exported 17.89 million tonnes of coal in September, rising 1.94% year on year but falling 1.23% month on month, data showed.

Russia's coal production reached 36.08 million tonnes in September, rising 8% over the same month last year and 3.15% from August. The production hit a new high since April this year, while the exports were at the new ebb since the same month.

Russia exported a total of 160 million tonnes of coal in January-September, up 16.62% from a year earlier. Its coal output picked up 8.56% year on year to 318 million tonnes.

China's metallurgical coke market saw an impasse between coking plants and steel mills over the fourth round of coke price hike last week. But a moderate improvement in sentiment was observed late las

China's thermal coal prices embraced a round of sustained rebounds last week on the back of active replenishment from downstream buyers ahead of the Spring Festival holiday. Will the snowfall and the

China imported 507,300 tonnes of anthracite in December, slumping 68.81% from a year ago and 54.63% from the preceding month, showed data from the General Administration of Customs on January 24.

China's coking coal market mainly remained stable during the past week given weak supply and demand, while some regions saw both downtrends and uptrends. Higher offers were mainly for pre

China's coal production hits record highs in December and in the full year of 2021, as the government continued to encourage miners to ramp up output to ensure energy supply, which has greatly offset

Some more Indonesian miners have reportedly restarted loading vessels to ship coal abroad, following the energy ministry's approval for seven mining groups to release some 1.4 million tonnes of coal i