Coal imports of Vietnam came in at 2.14 million tonnes in September, slumping 43.9% from the year-ago level and 43.8% from August, touching a seven-month low since March this year, showed preliminary data from the Vietnam customs authority. 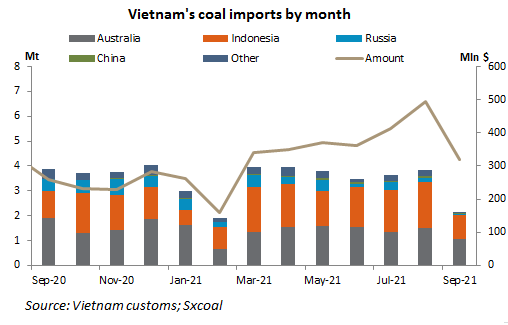 Yancoal Australia Limited said its attributable saleable coal production in the 4th quarter of 2021 came in at 9.3 million tonens, up 2% from 9.1 million tonnes a year ago, but down 6% quarter on quar

China's metallurgical coke prices are very likely to keep steady for the remainder of January, with both demand and supply losing steam approaching the Lunar New Year holiday. Some steel

Cold front that had lingered for several days in North China will move southward from January 25, bringing snow and steep temperature drop of more than 5 Celsius degree to most South China provinces,

Chinese thermal coal portside market may not find relief from previous strong downside expectations in the typically slack season, even though miners' holiday leaves for the Spring Festival and calmed

Daily crude steel output at key member firms of China Iron and Steel Association (CISA) was registered at 1.98 million tonnes during January 11-20, ticking down 0.23% compared with the previous ten da

Hebei, Jiangsu, Shandong, Liaoning and Shanxi, the top five steel-producing provinces, produced a total of 48.64 million tonnes of crude steel in December, rising 28.6% or 10.81 million tonnes from No

China's thermal coal imports in December saw clear declines on both year-on-year and month-on-month basis, but was still the second highest of the same month since 2014, and helped raise last year's t

Southern China's Guangdong province ranked first among other provinces and municipalities in coal imports for the second straight month in December, although its coal intakes dropped compared with bot

India's largest power producer, NTPC Limited, said the company is stepping up coal imports to avoid power crunch caused by a lack of coal. NTPC has imported a total 10 million tonnes of s

Shanxi, a major coal production hub in North China, has completed the signing of 1.09 billion tonnes of mid- and long-term coal supply contracts for 2022, a further increase of 105 million tonnes from

Indonesian thermal coal market didn't see much movement on January 21 with buyers still sitting on the sidelines, although the Indonesian government allowed more vessels to sail aboard. S