China's coke output fell 5% year on year to 39.67 million tonnes in August, with the decline deepening by 2.1 percentage points compared with the preceding month, according to data released by the National Bureau of Statistics on September 15.

However, the output climbed 2.27% from the month prior, marking the first month-on-month increase since April this year. This was partly encouraged by continued surge in coke prices, which propelled production enthusiasm, despite output curbs from environmental checks and controls on energy consumption. 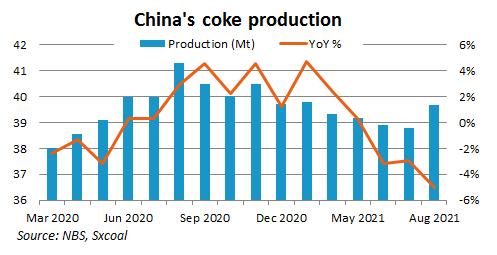 China's coke output totaled 319.58 million tonnes during January-August, rising 2.5% from a year ago, with the growth further narrowing 0.7 percentage point from the first seven months.

Coke producers proposed to raise coke prices by 200 yuan/t for the 11th round of uptick at the start of the week, in anticipation of tighter supply after the central inspectors stationed some production areas for environmental checks.

Shandong-based coking plants were requested to run at only around 50% of capacity, while coke production at Shanxi, Hebei, and Jiangsu was also affected to varying degrees.

The 11th uptick would bring the total increase to 1,560 yuan/t since the start of August.

Shandong province, the fifth-largest steel-making province in China, has further tightened the curbs on steel production since the Mid-Autumn Festival holiday period, raising the likelihood that other

China imported 970,000 tonnes of anthracite in August, up 79.6% from a year ago and 22.78% from the preceding month, customs data showed. The import value was registered at

China's coking coal imports climbed 24.14% from the preceding month to 4.68 million tonnes in August, but the volume was still 34.7% lower compared with the same month in 2020, customs data showed on

Vietnam's coal exports totaled 189,900 tonnes in August, more than tripling from 61,200 tonnes in the same month a year ago and up 37.79% from July, preliminary customs data showed. The v

Alberta province of Canada produced 1.48 million tonnes of coal in July, rising 14% from the same month in the preceding year, yet down 2.48% from a month earlier, according to data from Alberta Energ

India's Adani Group Chairman Gautam Adani said Adani will invest $20 billion in the next 10 years to develop renewable energy, and plans to achieve net zero emissions from its port operations by 2025.

The accumulative electricity suppliedby Inner Mongolia Power Group to Mongolia's Oyu Tolgoi mine, one of theworld'slargest known copper and gold deposits, had exceeded 10 TWh as of S

China's domestic thermal coal supply is facing a double whammy ahead of the start of winter heating season, but the supply woes could be eased if the energy consumption cap policy is well implemented.

China's import prices of seaborne coking coal from non-Australia countries extended surges this week fueled by tight supply in both domestic market and also the globe, narrowing their price advantage

China will implement stricter control of air pollution and carbon emissions during this winter heating period (Oct 1-Mar 31) on a larger cluster of cities than a year ago, the Ministry of Ecology and

Japan imported 16.14 million tonnes of coal in August, up 23.8% on the year, preliminary data from the Ministry of Finance showed on September 16. The imports were worth 249.6 billion yen

Madiliang coal mine of Inner Mongolia Intelligent Coal Co., Ltd., has been included in the national key coal mine list to shoulder supply guarantee task, according to the related notice from Inner Mon

Commercial coal output of China Shenhua Energy Co., Ltd., a listed arm of China Energy Investment Corp, rose 1.7% from a month ago to 24.3 million tonnes in August, the company said in a report.