South Korea's August thermal coal (other bituminous coal and other coal) imports fell back from a four-year high in July, according to South Korean customs.

South Korea's imports of thermal coal rose 7.53% from a year ago but fell 26.19% from a month ago to 8 million tonnes in the month, data showed. 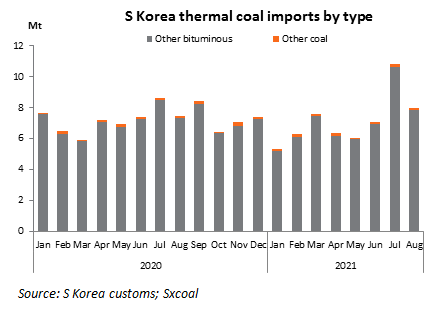 Primary coking coal prices regained upward momentum in Shanxi at the start of the week, backed by rebounding demand from coking plants, while blending coking coal continued strong gains in the top pro

China's coking coal market regained strength during the past week, as supplies of blending coals such as meager lean coal and gas coal declined as miners prioritized thermal coal supplies to power pla

China's natural gas output totaled 151.8 billion cubic meters during January-September, up 10.4% from a year ago, data from the National Bureau of Statistics showed on October 18.

China's coke output fell 9.6% year on year to 37.18 million tonnes in September, with the decline deepening by 4.6 percentage points compared with the preceding month, according to data released by th

China's cement production rose 5.3% from a year ago to 1.78 billion tonnes over January-September, showed the latest data from National Bureau of Statistics (NBS). China produced 210 mill

China's crude steel output dropped 21.2% from a year earlier to 73.75 million tonnes in September, declining for the fourth month in a row, showed data from the National Bureau of Statistics.

China will fully liberalize pricing for coal-based electricity as part of a drive to deepen market-oriented pricing reform in the sector, the top economic planner said on October 12 on its website.

Russia's largest coal producer Suek declared force majeure on the operation at the Far East port Vanino on October 12, as a result of a fire a day earlier. The fire occurred at Vanino Bul

Shanxi saw 56 coal mines out of the 60 suspended mines caused by heavy rain and flood resume production, which had little impact on long-term contract coal supply promised by the coal-rich province, t

China's coal imports jumped 76.07% from a year ago and rose 17.22% from August to 32.88 million tonnes in September, showed data from the General Administration of Customs (GAC).

Spot thermal coal prices kept surging at northern China ports after the National Day holiday, as cargoes released into the spot market has been squeezed by long-term contract supply under the governme

China's thermal coal prices kept moving higher on October 13 at northern transfer ports, mainly due to persistent supply tightness, but the imbalance between supply and demand has eased to some extent

China has ordered its top three coal-mining regions – Shanxi, Inner Mongolia and Shaanxi – to ramp up coal production in a bid to ease supply crunch and power crisis. According to Sxcoal'