Coal stockpiles at the major trading port of Qinhuangdao edged down in the first week of March compared with a week ago, as demand resumed on the back of strong industrial activity post the Lunar New Year holiday.

On March 5, the port's inventories were 5.76 million tonnes, down 240,000 tonnes from a week ago, but still 700,000 tonnes higher than a month ago. The inventory climbed to above 6 million tonnes at the end of February with increased net inflows as the demand was curbed during the holiday that ran in February 11-17. 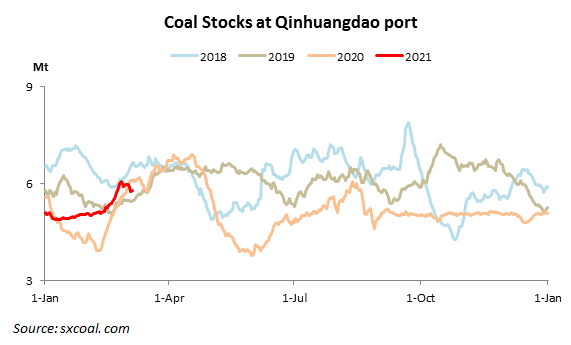 Inbound deliveries in the week (February 27-March 5) averaged 473,100 tonnes a day, down 29,300 tonnes from a week ago; the average outflow stood at 507,400 tonnes per day, up 85,700 tonnes on the week. With a combination of eased inflows and increased outflows, coal inventories at the port edged down last week.

Thermal coal prices at Qinhuangdao and surrounding ports in the Bohai Bay saw a recovery last week, but the market was still hovering at a lower level after a consecutive decline since mid-January. This, coupled with a rebound in mine-mouth prices that drove up the overall cost in shipping coal from production areas to ports, deterred some traders from further buying from production areas.

As the same time, cement, coal-chemical buyers speeded up pace in material procurement, driving up coal outflows from the port, although many utilities were still off the market for observation. The reduction of seaborne imports due to higher ocean shipping rates also made some buyers switch their appetites to domestic cargoes.

Coal stockpiles at the three major transfer ports in the Bohai Bay – Qinhuangdao, Caofeidian, and Jingtang – continued to build up over the last week. Huanghua port didn't realize data as of the time of writing.

Coal stocks at the major trading port of Qinhuangdao edged down last week compared with a week before as rail inflow couldn't cover outbound shipment, though both decreased during the week. &

China Shenhua Energy Co., Ltd, a coal-based integrated energy company, sold 32,400 tonnes of polythene in March, a year-on-year decrease of 0.9% but gaining 11.3% from the preceding month, said the co

Coking coal prices rose noticeably in northern China's Shanxi province, top production base of the material, backed by good sales and possible decline in production due to safety checks.

Russia exported 10.58 million tonnes of thermal coal (bituminous and sub-bituminous coal) in February, down 5.33% year on year but up 12.04% month on month, showed data from Federal Customs Service of