China's coal dedicated Daqin rail line, which connects coal hub Shanxi and transfer port of Qinhuangdao, shipped 34.45 million tonnes of coal in February, rising 45.3% from a year ago, with the growth accelerating significantly by 27.04 percentage points from the preceding month, Daqin Railway Co., Ltd., the railway operator, said in a statement March 4. 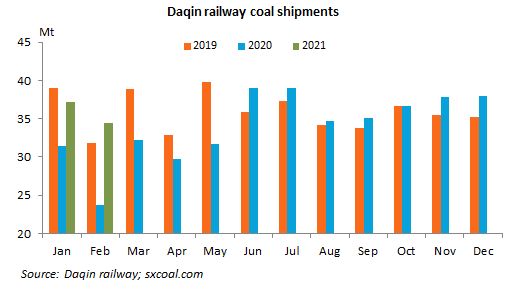 The line's shipments in February 2020 were heavily curbed due to the COVID-19 pandemic, which helped contribute to the large year-on-year rise.

February shipments, however, were 7.17% lower compared with January, mainly affected by shorter days.

From the perspective of daily average, the shipment in February improved further from January, with shipment capacity almost running at full capacity. Daily transportation volume stood at 1.23 million tonnes in February, up 33,300 tonnes compared with 1.2 million tonnes in January, according to the statement.

In January-February, Daqin line shipped 71.56 million tonnes of coal, a rise of 29.9% from the same period last year. The monthly volume has been rising on a yearly basis since November.

China produced 39.79 million tonnes of coke in March, up 4.7% compared with the year-ago level and 4.44% compared with 2019, data from the National Bureau of Statistics showed on April 16.

South Korea's metallurgical coal (including coking coal and PCI coal) imports climbed noticeably in March following two months of decline, with the total intakes of 3.24 million tonnes, which were up

Three coal mine accidents within five days have increased uncertainties in China's move to raise domestic coal production. On April 10, 21 miners were trapped in a flooded coal mine in no