The country's January imports at least hit a seven-year low, according to sxcoal.com calculation based on customs data. 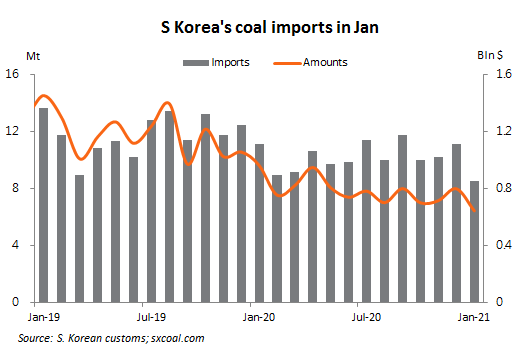 Australia was the largest coal supplier to South Korea in January, at 4.75 million tonnes, down 16.16% from the previous year and 12.22% from a month ago.

Indonesia followed with coal shipment of 1.55 million tonnes to the country, marking a year-on-year slump of 38.05% and a month-on-month fall of 3.81%.

Russia took the third place with 1.37 million tonnes of coal supply in January, falling 7.33% year on year and 31.69% month on month respectively.

Coal stockpiles at the major trading port of Qinhuangdao in northern China have recovered to above 6 million tonnes for the first time in over half a year, due to accelerated inbound arrivals vis-a-vi

Emerging demand for spot thermal coal, most of which came from cement producers, at China's northern major trading ports helped slow the decline in prices, fueling expectations of a pickup in March.

Indonesian coal exports maintained at high level in January 2021 after a spike in December 2020, mainly owing to large demand from China. Indonesia exported a total 36.7 million tonnes of

Indonesia is planning to remove royalty payments for coal used in domestic downstream sectors in an effort to push its coal processing industries to develop, according to a report by Reuters on Februa

Indian power generators imported 3.87 million tonnes of thermal coal in January, slumping 30.9% from the previous year and 5.15% from December 2020, falling for the third month in a row, showed the