Vietnam's coal import surged 25% on the year to 54.81 million tonnes in the year 2020, hitting a record high, showed preliminary data from the Vietnam customs authority. 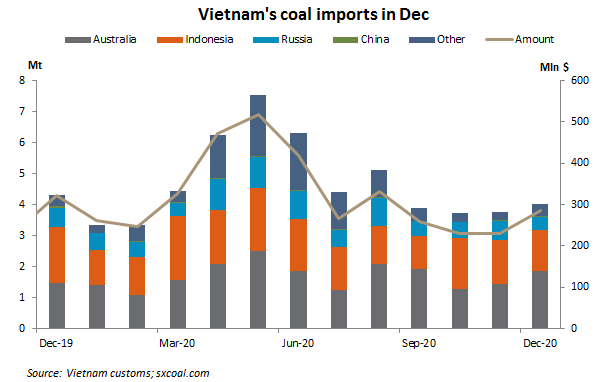 Australia was the top supplier for Vietnam in the month, with coal shipments at 1.86 million tonnes, increasing 27.73% from a year ago and 30.8% month on month.

Imports from Indonesia were 1.3 million tonnes in December, falling 28.24% from the year prior and 8.12% month on month.

Vietnam, Indonesia, the Philippines and Bangladesh were reported to have canceled a total of 45 GW coal-fired power generation projects in 2020.

India's demand lent some support to Indonesian thermal coal prices, which have showed signs of declining after Chinese buyers stayed away from the market to avert the recent surge in shipping costs.

Guangdong, China's top province in GDP, has rolled out a trial plan, valid for three years, to accelerate renewable energy use in power generation so as to ensure the completion of its target given by

China's coking coal market was running stable as a whole in February with prices of most types largely unchanged. Due to the Lunar New Year holiday over February 11-17, purchases from downstream buyer

ArcelorMittal swung to a net profit in the fourth quarter in 2020, according to the company's financial report. The leading steelmaking and mining group reported a net profit of $1.21 bil

China's domestic spot thermal coal market showed signs of pickup, as the sentiment was boosted by the futures market, which has been rising for days. Factors like emerging demand and limited availabil

State Grid Corp of China, the largest power grid operator in China, unveiled its carbon neutrality plan on March 1, as part of a drive to promote green transition in the country. The stat

Data showed coal stocks at the six coastal power groups were 15.52 million tonnes, up from 15.42 million tonnes a week earlier; their coal consumption combined rose from 536,000 tonnes to 585,900 tonn