Russia's coal exports in November 2020 bounced back from a month earlier led by a striking rise in shipments to China.

Russia exported 18.28 million tonnes of coal in November, a rise of 24.87% from October despite sliding 2.13% from November 2019, according to data compiled by Federal Customs Service of Russia. 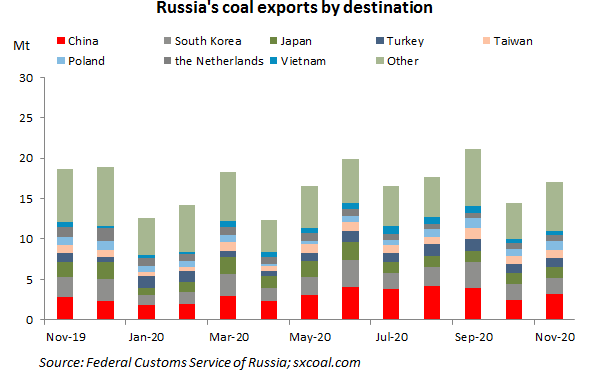 In November, Russian coal exports to China totaled 3.13 million tonnes, up 31% from the previous month and 10.64% from the year-ago level. This came on the back of surged demand in China owing to the colder-than-usual weather and strong economic recovery, as well as limited availability of spot cargoes.

Shipments to other traditional buyers of Japan and South Korea reached 2.18 million and 2.03 million tonnes, respectively, in November, ranking the second and third places behind China.

In January-November, Russia's coal exports totaled 184 million tonnes, down 7.11% compared with the same period last year; value of the shipments declined 26.07% to $11.2 billion.

China is likely to import more Mongolian coking coal through Erllianhot and Mandula border crossings in the fourth quarter this year, following the commissioning of Mongolia's Tavan Tolgoi - Zuunbayan

Offers and bids of spot thermal coal at northern China's major trading ports continued to pick up on March 4 driven by rising prices in production areas. But trading activity hasn't yet improved great

China Baowu Steel Group has signed a strategic partnership agreement with Sibanthracite Group, the largest producer of metallurgical coals in Russia, to seek for more than 700,000 tonnes of PCI coal a

China's coal consumption is expected to rise slightly in 2021, while coal imports would be maintained range-bound, according to a report issued by China National Coal Association on March 3.

India's demand lent some support to Indonesian thermal coal prices, which have showed signs of declining after Chinese buyers stayed away from the market to avert the recent surge in shipping costs.

Guangdong, China's top province in GDP, has rolled out a trial plan, valid for three years, to accelerate renewable energy use in power generation so as to ensure the completion of its target given by

China's coking coal market was running stable as a whole in February with prices of most types largely unchanged. Due to the Lunar New Year holiday over February 11-17, purchases from downstream buyer

ArcelorMittal swung to a net profit in the fourth quarter in 2020, according to the company's financial report. The leading steelmaking and mining group reported a net profit of $1.21 bil

Data showed coal stocks at the six coastal power groups were 15.52 million tonnes, up from 15.42 million tonnes a week earlier; their coal consumption combined rose from 536,000 tonnes to 585,900 tonn