Indonesia exported a total 36.7 million tonnes of coal in December, rising 1.5% from the same month a year ago and 18.29% month on month, which hit a new high since April, 2020, according to cargo-tracking data from Kpler. 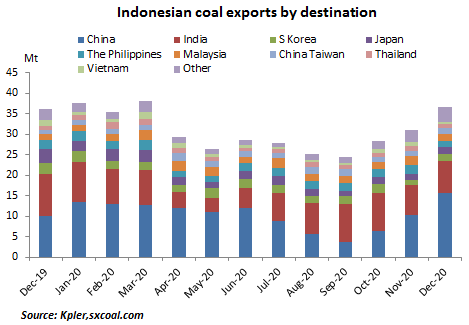 Driven by strong demand from China, exports to the largest coal consumer reached 15.7 million tonnes in December and hit a new high since June, 2019, surging 56.43% year on year and 53.92% month on month.

Indonesia exported 7.72 million tonnes of coal to India last month, diving down 25.11% year on year but up 3.94% from the previous month.

Indonesia's coal production totaled 558 million tonnes in 2020, surpassing the annual goal of 550 million tonnes set at the beginning of the year, but still 9.5% lower than the 2019 level.

China's domestic thermal coal market remained on the downside in the first week after the Lunar New Year holiday, as demand was weak and may not improve notably until March. Trading activities remaine

China's central government unveiled the result of coal consumption reduction work in 2019, putting pressures on local governments to further cut or replace use of the dirty fossil fuel in a bid to rea

Indonesian thermal coal prices got some support from growing buying interest in India, while Chinese buyers are trying to press down prices as industrial demand hasn't yet fully recovered from the Lun

Mongolian coking coal prices continued decreasing at Ganqimaodu border crossing in China, partly due to a quick increase in supply as a result of strict checks on coal storage that has led some owners

Driven by a sharp rise in global bulk shipping market on the back of a spike in grain loading out of east coast South America, many ship owners with operations at both domestic and international marke