South Korea imported a total of 86.97 million tonnes of thermal coal (bituminous and sub-bituminous coals) in 2020, falling 15.58% from 2019 level, according to South Korean customs authority.

The decline in thermal imports was mainly due to the country's falling thermal power generation. In 2020, South Korea's thermal electricity consumption fell to a six-year low of 197 TWh, which was ascribed to government's limitations on thermal power utilities from December, 2019 till March, 2020 and strong competition from fallen liquefied natural gas prices.

South Korean government said the country will increase the renewable energy usage in the future and reduce coal and nuclear energy consumption. By 2034, coal's share in total enery mix will be lowered to 22.7% from 31.9%. 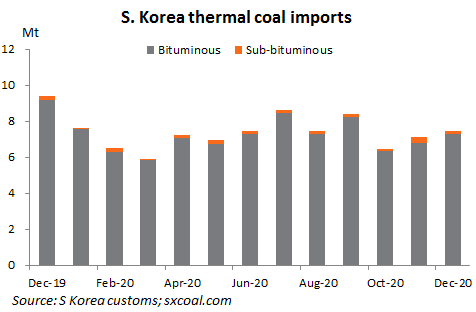 South Korea imported 7.28 million tonnes of bituminous coal in December, falling down 20.67% year on year but rising 7.03% month on month.

Chinese metallurgical coke market is heading for a new round of price increase by 100 yuan/t at the start of the week, the rare 14th straight round of markup. One major coke producer in H