Turkey thermal coal imports rose for second straight month in October and created the second highest record since this year, according to the country's statistical authorities.

The country imported 3.46 million tonnes of thermal coal in the month, up 0.85% on the year and 4.59% from September, showed data from Turkish Statistical Institute. 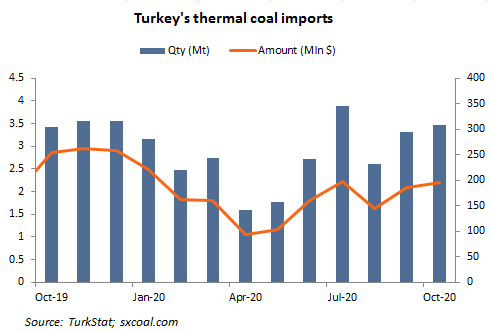 In October, Turkey's coal imports reached 4.03 million tonnes, rising 4.35% from the same month last year. It was also 6.37% higher than that in September.

Turkey's coal imports totaled 33.34 million tonnes in January-October, up 10.31% from a year ago.

After rising for more than two months, thermal coal prices started falling at key northern production areas in China late last week. It was a slow response to the decline at northern transfer ports em

China's metallurgical coke prices are likely to head to a new high this week, despite a growing price tussle between coke producers and steel mills. Some coke producers in Shanxi and Hebe

Coal stockpiles at China's major trading port Qinhuangdao remained below 5 million tonnes, a level that has been maintained for months, despite increased inflows from northern production areas.

Vietnam's coal import surged 25% on the year to 54.81 million tonnes in the year 2020, hitting a record high, showed preliminary data from the Vietnam customs authority. The country impor

China's power consumption in 2020 increased 3.1% on the year, as the growth driven by strong economy growth and higher-than-usual winter household heating more than offset the decline during the coron

Thermal coal prices showed no signs of abating at major production hubs as demand remained strong from downstream buyers, even after the bearish sentiment appeared at northern transfer ports.

Expectations for weakening upward strength in Chinese thermal coal are growing this week following two months of strong rises, as rebounding temperatures in many regions are bringing down utilities' d