Japan's coking coal imports inched up in October and hit the highest since May this year, official data showed.

The country took 4.95 million tonnes of the steel-making coal last month, rising 3.43% from a month ago, although the volume was still 14.32% lower compared with a year ago, showed data from Japan's Ministry of Finance (MOF). 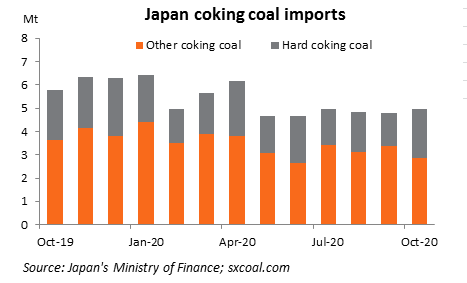 Japan's intakes of Australian cargoes climbed 9.42% year on year and 24.1% month on month to 2.84 million tonnes in October, with the growth accelerating compared with a month earlier.

The volume accounted for 57.3% of Japan's total coking coal imports in the month, hitting the third highest since March 2018, data showed.

China's coal imports in 2020 rose to the highest since 2014 even though import restrictions were further tightened. China imported a total 303.99 million tonnes of coal last year, a rise of 1.5% year

Higher concentration of raw coal production in China is likely to increase the volatility of coal prices in winter over the next few years, with uncertainties from logistics capacity to fulfill higher

For the first time in history, the proportion of China's coal-fired power installed capacity has fallen below 50% in 2020, marking a solid step towards its commitment of "carbon neutrality" in 2060. &

After rising for more than two months, thermal coal prices started falling at key northern production areas in China late last week. It was a slow response to the decline at northern transfer ports em

China's metallurgical coke prices are likely to head to a new high this week, despite a growing price tussle between coke producers and steel mills. Some coke producers in Shanxi and Hebe

Coal stockpiles at China's major trading port Qinhuangdao remained below 5 million tonnes, a level that has been maintained for months, despite increased inflows from northern production areas.

China Baowu Steel Group, the world's leading steel producer, said it will strive to reach peak carbon emission by 2023 during a cadre conference held January 20, marking it the first major company to