The imports, however, were still 23% lower compared with the year-ago level, data showed. 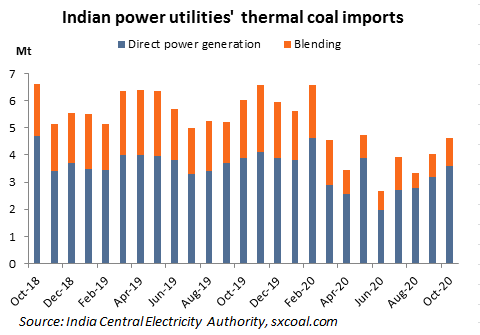 In October, 54 power generators did not import any coal.

China's coking coal market was still buoyed by strong coke market during the past week, with coke producers actively seeking supplies to meet resilient demand and avoid supply contraction during the S

Northern China's Shanxi province had 668 coal mines in operation by the end of 2020, with the combined production capacity of 1.05 billion tonnes per annum, according to an announcement by Shanxi Ener

The coronavirus-induced road transport curbs on routes between Hebei and the neighboring provinces are likely to further cap coking coal stockpiles at coke and steel producers in the short run, althou

Chinese coking coal market kept firming up in the last few months of 2020, recovering from low ebbs earlier in the year, with the average price moving down from 2019. Will 2021 witness a bullish run o

China's receipts of seaborne coal in 2020 shed 7.7% from a year ago as a strong rebound in the last two months failed to offset the steep decline in earlier months, Kpler's cargo-tracking data showed.

Indonesia exported a total 36.7 million tonnes of coal in December, rising 1.5% from the same month a year ago and 18.29% month on month, which hit a new high since April, 2020, according to cargo-