Indonesia exported a total 28.02 million tonnes of coal in October, slumping 30.47% from the same month a year ago, but rising 14.67% month on month, which hit a new high since May, 2020, according to cargo-tracking data from Kpler. 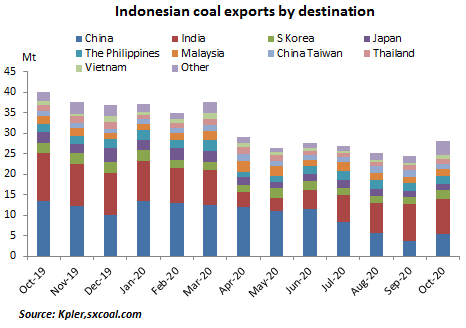 Exports to India, the top destination for the country's coal, came in at 8.63 million tonnes in October, falling 25.34% year on year. The volume was 3.91% lower than September.

The country exported just 5.34 million tonnes of coal to China last month, diving down 60.61% year on year, but surging 40.79% from the previous month.

In October, Indonesia exported 2 million tonnes of coal to the Philippines, up 9.87% from a year ago and 5.38% from a month ago.

Chinese metallurgical coke market is heading for a new round of price increase by 100 yuan/t at the start of the week, the rare 14th straight round of markup. One major coke producer in H