Japan imported 13.73 million tonnes of coal in September, dropping 7.63% year on year but up 5.28% from the preceding month, showed data from the country's Ministry of Finance (MOF). 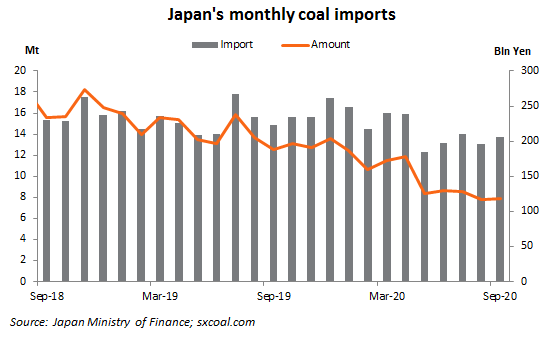 Japan imported the most coal from Australia in September, at 7.94 million tonnes, which was 7.32% lower compared with a year ago but 5.47% higher than a month earlier.

The September's imports sent total intakes to 129 million tonnes during the first nine months, down 6.14% year on year. The accumulative imports were worth 1.31 trillion yen, down 32.36% from last year.

Chinese utilities are seeking for more thermal coal imports from Colombia this week, as they want to find new steady sources as alternatives to Australia, whose coal products were blacklisted by Beiji

China's steel products price mixed in late November, according to the latest data from the National Bureau of Statistics (NBS). The prices of rebar and wire rods dropped, while those of m

Chinese thermal coal rallies that have persisted for seven consecutive sessions are not likely to slow down on outlook of the lingering shortage at northern ports, although some thermal coal indexes,

According to market source, Rizhao Steel revised up coke purchase price by 50 yuan/t from December 4, marking the scope of coke prices' 8th round growth is expanding. From late August to

US coal production was estimated at 10.58 million short tons (9.59 million tonnes) over the week ending November 28, falling 5.2% from the previous week and down 10.7% from the same period last year,

Several coal price institutions announced to halt updating their daily indexes of spot thermal coal as the market has been rising too wildly this week. On December 3, CCI Index Team of sx

A group of metallurgical coke producers in northern and eastern China proposed to raise coke prices by 50 yuan/t at the start of this week amid tight supply, marking the eighth round of uptick, which

Activity in China's steel industry extended the upward momentum in November with both demand and supply showing signs of further recovery. The Purchasing Managers' Index (PMI) for the sec