Indian power generators imported 4.03 million tonnes of thermal coal in September, up 20.78% from August but down 22.87% from the same period last year, showed the latest data from the Central Electricity Authority (CEA). 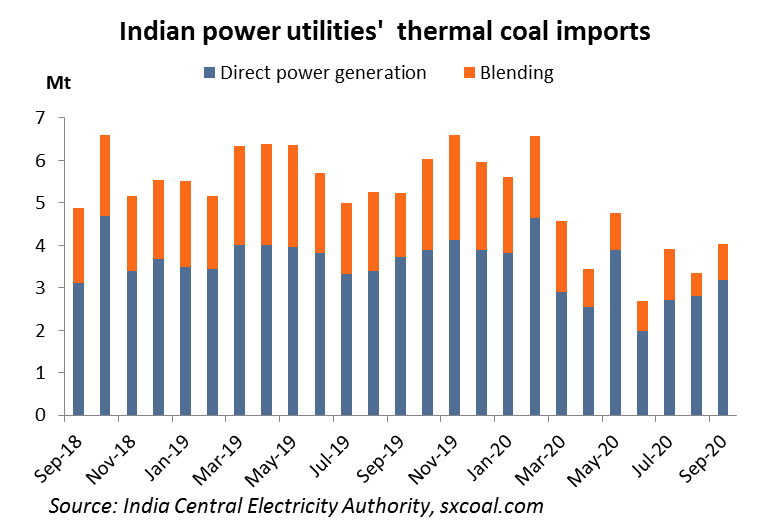 The imports reached a new high since June but still much lower than the average monthly imports of 5.79 million tonnes in 2019, which was mainly due to the lockdown measures to combat COVID-19 pandemic and the government's policy of replacing imported coal with domestic coal.

Among them, 3.18 million tonnes of imported coal were directly used for power generation and 854,000 tonnes were blended with domestic coal.

In September, 52 power generators did not import any coal.

Preliminary statistics from India's mjunction showed that India's coal imports increased 11.6% year on year to 19.04 million tonnes in September, owing to the recovery of coal consumption industries and low coal prices in international markets, comprising 11.97 million tonnes of non-coking coal, slightly up 1.35% from the year-prior level.

Northwestern China's Ningxia autonomous region produced 62.82 million tonnes of coal from January to August, up 10.8% year on year, with the growth down 1.1 percentage points from the first seven mont

China's coking coal prices continued to increase in September as coke makers' demand for the feed coal increased. But the growth contracted clearly compared with a month ago, since steel industry rema

A large number of thermal coal miners contacted by Sxcoal anticipated mine-mouth prices are unlikely to drop in the near term, as coal supplies are expected to remain in tightness before the 20th Nati

China has managed to maintain prices of coal and electricity in reasonable ranges, playing a significant role in ensuring steady economic growth, an official of the National Development and Reform Com

China's manufacturing activity improved for the third straight month in September despite impacts of COIVD-19 lockdown in some cities and decreased Chinese currency against the dollar. In

The Purchasing Managers' Index (PMI) in the steel sector, an economic indicator for the industry, continued rebounding slightly for the second straight month to 46.6 in September, according to the lat

Poland scarped a ban on use of lignite, or brown coal, to heat homes until April next year as part of efforts to help citizens go through the cold winter with a potential energy supply shortfall.

The European Commission has slightly relaxed some sanctions on Russian thermal coal, allowing EU-based operators to support its transport and finance if the coal is shipped to non-EU member countries.

Indonesian thermal coal prices have been rising at a faster pace since last week as Chinese utilities tried to build stockpiles ahead of the 20th CPC National Congress, but the spike seemed to blunt t

At least 20 coal-fired power plants in Germany are reopened or extended closing dates to ensure the country has enough energy to get through the winter. Germany's key power producer RWE s

Coal inventory at China's Qinhuangdao port extended the rise last week, as demand for winter coal restocking and the requests for power plants to build up stocks ahead of the October political event p

China's top coal province Shanxi moved to increase coal production by 107 million tonnes (Mt) year on year to 1.3 billion tonnes (Bt) in 2022, in response to the central government's call to boost out