China imported 8.23 million tonnes of thermal coal (including bituminous and sub-bituminous coals and excluding lignite) in September, falling 39.26% year on year but rising slightly by 0.73% from August, showed the latest data from the General Administration of Customs (GAC).

From January to September, a total of 102.51 million tonnes of thermal coal were imported by China, rising 7.36% year on year, with the cumulative expenditure reducing 7.36% from a year ago to $6.12 billion. 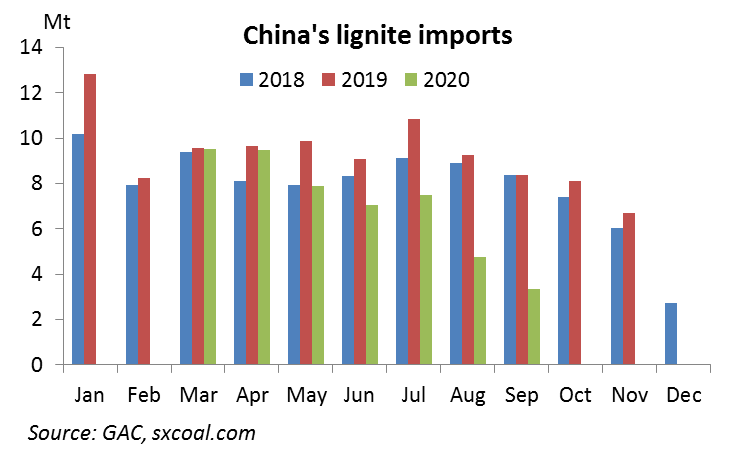 From January to September, a total of 72.59 million tonnes of lignite were imported by China, down 17.4% from the same period of last year. The imports amounted to $2.88 billion, falling 24.5% from the corresponding period of 2019.

US coal production was estimated at 10.58 million short tons (9.59 million tonnes) over the week ending November 28, falling 5.2% from the previous week and down 10.7% from the same period last year,

Several coal price institutions announced to halt updating their daily indexes of spot thermal coal as the market has been rising too wildly this week. On December 3, CCI Index Team of sx

Buying interest lulled in Chinese spot thermal coal market as wait-and-see sentiment grew thicker after prices jumped to a 20-month high since mid-March 2019. The procurement pause is not

China's seaborne metallurgical coal, mainly supplied by Canada and US, saw price advantage narrowing after a flurry of hikes supported by sizzling buying appetite from end users and domestic shortage.

Chinese metallurgical coke market extended the growth with another two rounds of rise in November, adding up to seven rounds in a row since early August, due to a combination of supply tightness and s

Thermal coal stockpiles continued drifting lower at ports along the Yangtze River, as northern ports haven long failed to build up inventory amid short supply at main production provinces and this kep

A group of metallurgical coke producers in northern and eastern China proposed to raise coke prices by 50 yuan/t at the start of this week amid tight supply, marking the eighth round of uptick, which

Japan's coking coal imports inched up in October and hit the highest since May this year, official data showed. The country took 4.95 million tonnes of the steel-making coal last month, r