S Korea Sep coal imports up to an 8-mth high 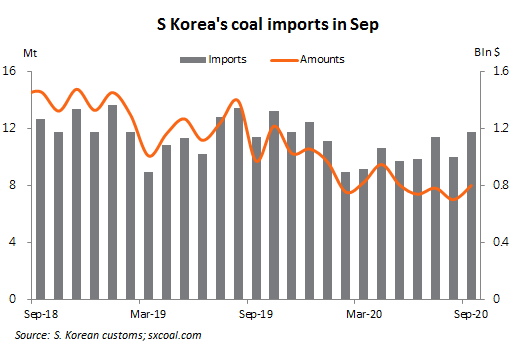 Australia was the largest coal supplier to South Korea in September, at 4 million tonnes, up 9.53% from August but down 3.84% from the previous year.

Russia followed with coal shipment of 3.28 million tonnes to the country, marking a year-on-year growth of 47.8% and a month-on-month increment of 56.44%.

Indonesia took the third place with 2.76 million tonnes of coal supply in September, increasing 0.3% year on year and 66.04% month on month respectively.

Activity in China's steel industry extended the upward momentum in November with both demand and supply showing signs of further recovery. The Purchasing Managers' Index (PMI) for the sec

Spot thermal coal prices at China's northern transshipment ports jumped to a new high of nearly 19 months, as firm trading activities stoked the concerns of sustained supply crunch. On No

China's coal imports so far this year presented a much sharper curve than the past years even with similar control measures following import policy relaxation in the beginning of recent years.

China is aiming to expand thermal coal imports from Indonesia in 2021 after the fossil fuel trade has been affected by the COVID-19 this year, according to a recent agreement signed by the two countri

China imported 4.84 million tonnes of thermal coal (including bituminous and sub-bituminous coals but excluding lignite) in October, slumping 58.02% year on year and 41.19% month on month, showed the

Russia is likely to further squeeze market share of Indonesia, a traditional thermal coal supplier, in main Asian countries like China in the future. China's import of thermal coal (excl.

China's coal imports in October hit a new low of 13.73 million tonnes within this year, which plunged by 46.56% year on year and declined 26.5% from September, according to data from the General Admin

Indian power generators imported 4.64 million tonnes of thermal coal in October, up 14.99% from the preceding month, marking the second consecutive monthly increase, showed the latest data from the Ce

Canada's coal miner Teck Resources announced that it has raised its coking coal sales to China in the fourth quarter this year due to increased demand, the miner said in a statement on November 22.

Northern China's Shanxi province rolled out strict regulation to prevent mine accidents from happening. The provincial government stated once a major accident occurs at a coal mine owned