South Africa's thermal coal (bituminous coal) exports increased by 65.12% from an over 6-year low in April to 6.57 million tonnes in May, customs data showed, due to increase of domestic coal production and also significant recovery of demand from its buyer of India.

The exports, however, were still 0.67% lower than the year-ago level, data showed. 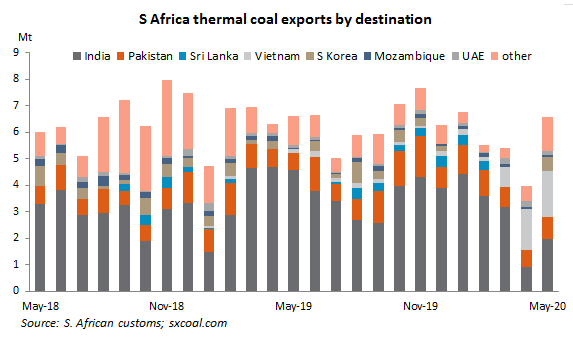 India was the top destination, with coal shipment of 1.98 million tonnes in May, down 56.91% from a year ago, but up 110% from the preceding month.

South Africa exported 538,000 tonnes of thermal coal to South Korea in May, which compared to no shipments in the previous month and the year-ago month, data showed.

Its cumulative thermal coal exports from January to May were 28.68 million tonnes, a decrease of 9.5% compared with 31.69 million tonnes in the same period last year.

The coking coal market endured another downward session on July 31 with more miners cutting prices under sales pressure. Sentiment is bleak for the market outlook as stocks are still at high levels at

China Shenhua Energy Co., Ltd., a listed arm of China Energy Investment Corp (CHN Energy), foresaw a 15% yearly drop in net profit to 20.7 billion yuan in the first half of this year, the company said

15 coal cos on Fortune China Top 500 list A total of 15 listed coal enterprises have taken positions on Fortune's Top 500 Chinese Enterprises list this year, according to the ...

There was a quicker-than-expected growth in China's coal imports in the first half of 2020, in spite of the largest coal consumer's stringent import curbs aimed at reviving domestic coal market after

South Africa's thermal coal (bituminous coal) exports increased by 65.12% from an over 6-year low in April to 6.57 million tonnes in May, customs data showed, due to increase of domestic coal producti

A total of 15 listed coal enterprises have taken positions on Fortune's Top 500 Chinese Enterprises list this year, according to the business magazine on its Chinese website. Shenhua Ener

Daqin Railway Co., Ltd, operator of coal-dedicated Daqin rail line, denied possible impact of coal resource exhaustion on its business in the short run when being asked by an investor. Th

Chinese seaborne import thermal coal market saw another muted session with few trades concluded, as demand remained weak from end buyers. On July 28, the market was just restricted to off

A lack of import quotas has still slammed coking coal import activities in China, even as overseas cargoes had a considerable price edge over Chinese domestic coal. Over 20 vessels loaded

Spot thermal coal prices continued to be steady at northern Chinese ports in the second trading day this week amid muted buying interest from end users and high stockpiles at utilities and ports.

China's coking coal market remained sluggish as a whole, mirrored in weak orders from coking plants contending with steel mills for coke price rise after three rounds of decline. Whether