Strong rains boost hydropower generation in most regions of China

Abundant rainfalls in South and East China since June have quickly boosted hydropower generation in many regions of the country, which, however, added more pressure for coal-fired power generation.

At 17:00 of June 21, water inflows of Three Gorges reservoir reached more than 30,000 cubic meters per second, and a total 34 power generating units of Three Gorges station all started operating, with capacity combined at 20.47 GW and daily output nearly 400 GWh.

Three Gorges, Gezhou Dam, Xiluodu and Xiangjiaba power stations had a total 82 power units operating at 10:00 of June 23, with capacity combined at 39.53 GW. 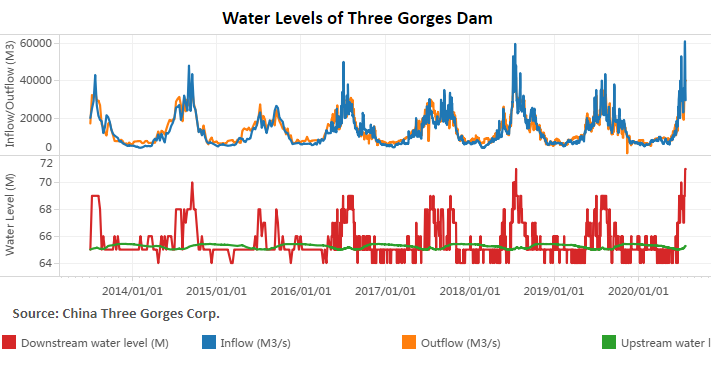 Thanks to plentiful rains, China logged a robust yearly rise of 6.9% in hydropower output to 121.5 TWh in June, compared with a 16.5% slump a month ago. It also soared 41.61% from May, showed data from the National Bureau of Statistics.

Top hydropower provinces of Sichuan, Yunnan, Hubei, Guizhou and Guangxi all registered monthly jumps of over 40% in generation in June, and a total 22 provinces posted growth.

Shandong province saw the sharpest MoM decline of 66.67% in hydropower output to 30 GWh.

According to Changjiang Water Resources Commission of the Ministry of Water Resources, rainfalls along the Yangtze River have been 40% higher than previous years since the start of the rainy season, with rainfalls in the middle and downstream section of the river 60% higher.

Hydropower generation is expected to maintain the upward momentum in July.

Thermal coal prices rose in China in the first half of July backed by safety regulation and control on sales quota at mines, but headed south in the second half amid a slide in buying interest from we

China's coastal coal shipping market spiraled up in July, as some power plants maintained coal shipment from northern ports. Purchase was robust from power plants in Guangdong and Fujian

China imported 7.35 million tonnes of natural gas in July, falling 0.99 million or 11.8% from the preceding year, showed data from the General Administration of Customs on August 7. The i

Australian high-ash thermal coal price was subject to a nearly 27% year-on-year decline, although the price was also in a 20-day downside starting from July 24 last year due to similar demand shrink,

Bayan Resources, one major coal producer in Indonesia, registered a year-on-year slump of 24.4% in coal output to 12.1 million tonnes in the first half year. Its coal sales decreased 3.9%

The year-to-date coal export from Mongolia totaled 11.26 million tonnes as of August 2, marking a year-on-year slump of 46.4%, according to Mongolian website IKON on August 3, citing Mongolian customs

Coal shipments through the railway network across China totaled 1.12 billion tonnes in the first six months this year, down 6.8% from the same period in 2019, data from the National Development and Re

Wuhai, in China's one of three largest coal bases of Inner Mongolia, started cancelling night shift at local mines, after more than four months of preliminary research and preparation work, according

Russia exported about 105 million tonnes of coal during the first seven months, falling 4.83% from 111 million tonnes a year ago, data showed from Energy Ministry of Russian Federation. C