The figure was also a sharp increase compared with only 2,147 tonnes in the same month last year, according to the General Administration of Customs. 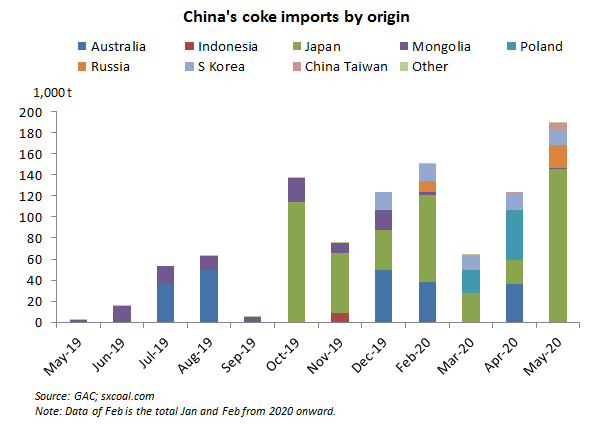 The surge in Japanese coke supplies came after declines of domestic consumption in the island country, amid steel production curbs during COVID-19 outbreak.

Japan's top two steelmakers Nippon Steel and JFE Steel had announced plans to temporarily suspend five blast furnaces, which could drag down annual crude steel output by the world's No.3 steel producer to below 90 million tonnes, probably the lowest since the global financial crisis in 2009, Reuters reported on April22.

Coke intakes from Russia stood at 22,000 tonnes. China did not import coke from the country last month, data showed.

China bought 15,020 tonnes of coke from S Korea in May, dipping 9% from the preceding month.

Coal stocks at Qinhuangdao port increased apparently this week (August 1-7) to nearly 6 million tonnes, according to data from www.sxcoal.com. As of August 7, 5.78 million ton