Coal production of the 10 largest coal producers increased by 1.22% year on year in the first five months, according to data released by China National Coal Association.

Combined production of the top 10 producers totaled 690 million tonnes during the period, accounting for 64.5% of the 90 major producers monitored by the association. 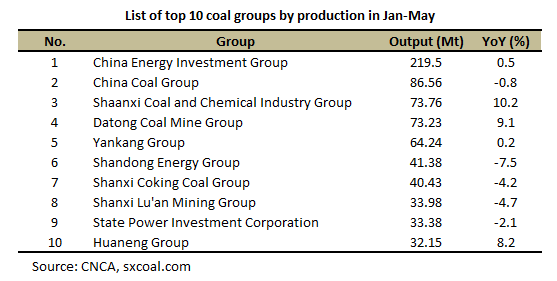 In January-May, China's coal production totaled 1.47 billion tonnes. That means the top 10 miners produced 46.9% of China's total over the period.

Thermal coal Production area Coal prices inched up 5 yuan/t in Ordos of Inner Mongolia, as some mines halted production due to lack of coal sales quotas and relevant inspections, while other are

US coal production is expected to drop to a 57-year low of 502.2 million short tons in 2020, said the Energy Information Administration (EIA) in its August Short-Term Energy Outlook on August 11.