Japan's thermal coal imports (bituminous and sub-bituminous coal) fell 10.11% from a year ago and 21.91% from a month ago to 7.13 million tonnes in May, hitting the lowest level since June 2015, data showed.

The country imported 44.93 million tonnes of thermal coal in January-May, down 2.07% compared with a year earlier, data showed from the Japan Ministry of Finance.

In May, Japan imported 6.59 million tonnes of bituminous coal, falling 10.48% from the preceding year and 24.31% from the month prior.

Australia remained the largest bituminous coal supplier, shipping 4.47 million tonnes to Japan in the month, down 14.39% year on year and 25.88% from the month-ago level. 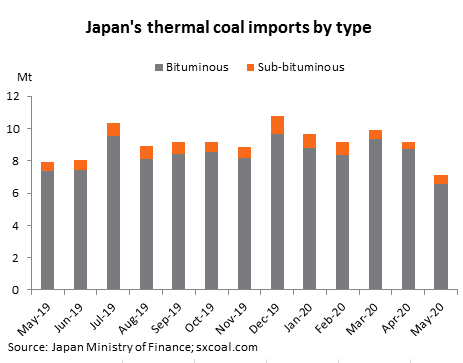