Thailand imports of thermal coal (including bituminous coal and sub-bituminous coal) in May logged the second monthly drop in a row, according to the latest data from the Thailand Customs. 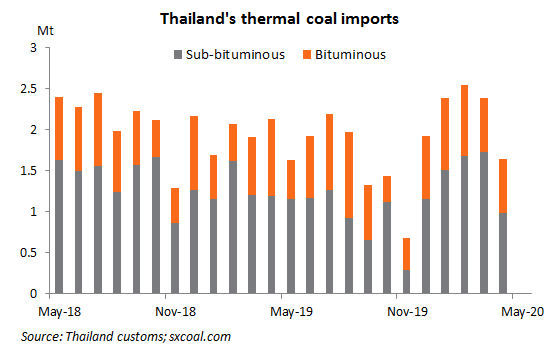 It imported the largest volume of bituminous coal from Australia at 0.29 million tonnes, falling 34.31% from the same period last year.

A total of 0.21 million tonnes of bituminous coal were imported from Indonesia, ranking second, plunging 56.59% from 0.49 million tonnes during the corresponding period of a year ago.

Thailand imported 0.99 million tonnes of sub-bituminous coal in May, down 16.76% from the year-ago level.

Of that, sub-bituminous coal imports from Indonesia amounted to 0.83 million tonnes, a decrease of 26.92% compared with the same period of the previous year.

Thailand imported 0.10 million tonnes of sub-bituminous coal from Russia, while the imports were zero in May, 2019.

In May, anthracite imports were 340 tonnes in Thailand, up 206.31% from April. Thailand did not import any coking coal in May.

In particular, bituminous coal and sub-bituminous coal imports added up to 3.81 million and 7.07 million tonnes, up 7.61% and 9.79% year on year respectively.

Data from the Office of Energy Policy and Planning of Thailand showed, Thailand consumed 11.83 million tonnes of coal (including lignite) in total from January to April, a 1.25% drop year on year.

Of that, 7.30 million tonnes of coal was burned in Thailand's coal-fired utilities, down 0.71% from a year ago, which accounted for 61.6% in Thailand's total coal consumption.

Northern China's Shanxi province had 668 coal mines in operation by the end of 2020, with the combined production capacity of 1.05 billion tonnes per annum, according to an announcement by Shanxi Ener

The coronavirus-induced road transport curbs on routes between Hebei and the neighboring provinces are likely to further cap coking coal stockpiles at coke and steel producers in the short run, althou

Chinese coking coal market kept firming up in the last few months of 2020, recovering from low ebbs earlier in the year, with the average price moving down from 2019. Will 2021 witness a bullish run o

Russia's coal exports in November 2020 bounced back from a month earlier led by a striking rise in shipments to China. Russia exported 18.28 million tonnes of coal in November, a rise of

Growing heating demand and low availability have pushed up thermal coal prices quickly at China's northern transfer ports, with a few transactions sealed above 1,000 yuan/t, a high level only behind t

China is building a stronger cooperation with neighboring Russia on coal and other fossil fuels after it informally blocked off imports from Australia due to a deteriorating political relation.

Truck inbound delivery of thermal coal towards northern China's Hebei province has been suspended as new COVID-19 cases found last week forced the province into lockdown. As domestic supply has been c

Coal mines in major production bases of China has imposed restrictions on trucks coming from Hebei province to load coal after a fresh outbreak of the coronavirus in the province, but miners reported