China's economic and industrial activities are recovering at a fast pace, as the country has brought the COVID-19 epidemic under control. Against this backdrop, how its coal market would move over the post-epidemic period is closely watched by participants at home and abroad.

In an online webinar organized by CMT on June 10, Sarah Liu, principal analyst of sxcoal.com, gave a quick update of COVID-19's impact on the Chinese coal market and shared her market outlook post COVID -19.

China's coal supply was shortly affected by lockdowns during the epidemic – with coal production falling to a historical low in February, but recovered rapidly in next months, following government calls to ensure coal supply, Liu introduced, noting the traffic ministry issued green passes for coal trucking with no expressway toll fees. 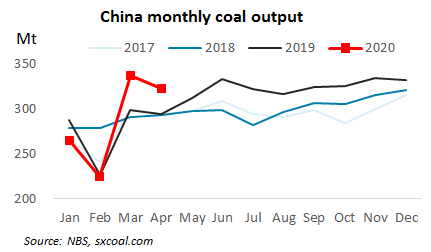 Coal supply slowed down with the falling of capacity utilization in May as a result of production restriction for safety concerns during China's annual political gatherings – "The Two Sessions", which lasted about 10 days from May 21.

Compared with the supply side, the impact of COVID-19 on demand side was even bigger and lasted longer, due to the slow progress in recovery of downstream industries.

However, demand is picking up significantly. "Coal burns at key power plants and the six coastal power groups gained 7.8% and 7.2% year on year growth respectively from the beginning of May. This is mainly attributed to positive growth of industrial production, as well as strong recovery of the services sector," Liu said. 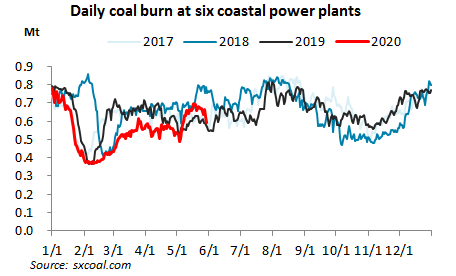 In the coking coal segment, Liu said demand was firmly supported by downstream production. "From the beginning of the second quarter when steel demand peak season started, the government's stimulus policies and strong industrial recovery impetus has been driving hot metal and crude steel output to increase," she said. "And steel products stock entered a destocking cycle."

With a combination of downstream demand recovery, production restriction over the "Two Sessions", as well as Daqin line maintenance and tightening import curb, Chinese thermal coal prices started bottoming out from late April.

Looking at coking coal, however, prices continued falling due to rapid supply recovery, strong import, and decline of coke prices.

In the second half year, economic fundamentals are expected to continue improving in China, and policy support and easing liquidity are both favorable for domestic coal demand.

From the supply side, however, thermal coal production will continue increasing this year. Raw coal output is forecast to grow 0.8% to 3.88 billion tonnes this year, according to Liu.

"This indicates a rather loose balance between supply and demand," she pointed out. "So a fluctuating pattern can be foreseen in the second half year with the average price slightly higher than H1, while the average price for the whole year is expected to continue coming down to 540 yuan/t (for 5,500 Kcal/kg NAR coal), a 9% fall from 2019."

In terms of coking coal, "prices stand stable from mid May till now and are likely to rise in the second half year supported by economic recovery and stimulus measures, strong steel and coke production, as well as a potential rally of seaborne coking coal prices amid lift of lockdown in other countries," Liu said.

But there will be a supply glut that continues this year, which will lead the price direction moving downward with the average CCI Liulin low-sulfur price index to 1,360 yuan/t, a 13% drop compared with that in 2019, she predicted.

China's thermal coal market stabilized on December 2 as bullish sentiment waned in anticipation of temperature recovery in the south, the major destination for thermal coal from northern ports.

Indonesia aims to establish a coal fund agency and start collecting a coal levy in the first quarter next year, in order to ensure supply security for domestic power utilities and industries, energy m

Sentiment in China's coking coal market was moderately reinforced with more online auctions settled higher following the completion of the second round of coke price hike on December 2. M

Chinese thermal coal prices showed more signs of stabilizing from previous drops on December 2, with some offers rebounding by 20-50 yuan/t, since demand from chemical and residential customers increa

China's PCI coal prices remained weak as a whole in November, as steel mills and traders maintained prudent buying stance amid regional mismatch of supply and demand due to COVID flare-ups and negativ

Newcastle thermal coal prices increased as demand is expected to surge in Europe where temperatures are forecast to start dropping dramatically in the next two weeks. On November 25, the

Mongolia opens a new rail line to China on November 25 in a move to expand commodity exports despite the COVID-slowed cross-border trades. The start of the 226.9-kilometer Zuunbayan-Khang

Coal stocks at China's main coal transshipment port of Qinhuangdao climbed to 5.62 million tonnes on November 25, hitting the second-highest level so far in the year and much closer to the year-ago le

Mongolia exported 1.92 million tonnes of coal during the first half of November, up 1.07% compared with the same period in October and jumping 144.95% year on year, according to the National Statistic

China's spot thermal coal prices started stabilizing at the beginning of this week as concerns of colder weather prompted utilities to seek spot cargoes, traders said. On November 28, off

After snapping a five-week price decline a day earlier, Chinese portside thermal coal prices advanced a little further on November 29, buoyed by cold weather among other factors. On Novem

China's portside thermal coal market sniffed out softening sentiment in the first day of December, as the recent cold wave is close to an endand utilities may retreat into the sidelines again.