Daqin railway, core asset of Daqin Railway Co., Ltd, reported a 20.57% decline in May coal shipment compared with the preceding year, said the company in a statement on June 9.

The railway delivered a total 31.63 million tonnes of coal in May, increasing by 1.91 million tonnes or 6.43% from a month ago, indicating that supply capacity was enhanced greatly on the whole as influences of safety and environmental crackdowns during the "Two Sessions" and railway maintenance are subduing. 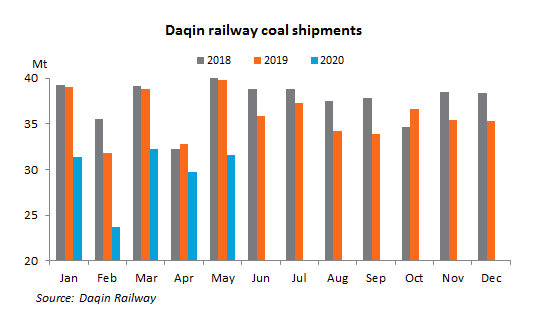 In the first five months, Daqin railway shipped a total 148.68 million tonnes of coal, marking a decrease of 18.48% year on year, with decline quicker than a drop of 17.89% in January-April.

The year-on-year decline in coal shipment showed the impact of the Covid-19 epidemic on the economy still exists, as energy consumption of downstream enterprises has not returned to normal. However, this is also directly related to the maintenance of the Daqin Line in April last year.

In addition, the data also reflects that the overall shipment volume of the Daqin line has decreased. The implementation of "energy consumption control" in East China has a great impact on coal consumption and power consumption, and there is little growth room for coal consumed by power plants in coastal areas.

Indonesian miners are broadening its thermal coal buyers worldwide trying to cushion the hurt in China and India, the top two destinations of its coal exports. Pakistan, after a rebound i

Coal stocks at Qinhuangdao port increased apparently this week (August 1-7) to nearly 6 million tonnes, according to data from www.sxcoal.com. As of August 7, 5.78 million ton