China major coal firms output up 0.7% on yr in Jan-Apr

Raw coal output from member companies with China National Coal Association amounted to 840 million tonnes in the January-April period, a rise of 0.7% year on year, showed data from the association.

Five of the ten firms reported combined increase of 18.37 million of raw coal output, while the remaining five suffered a total reduction of 6.82 million tonnes in production, said the CNCA. 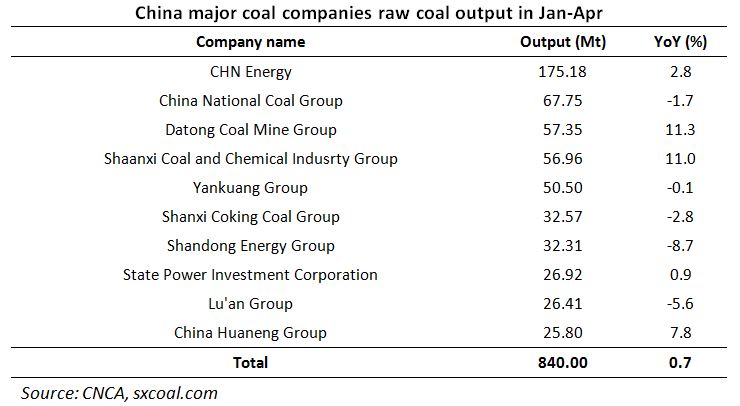 Total profit of the member firms from both coal and non-coal businesses slumped 39.6% on the year to 29.28 billion yuan ($4.1 billion) in the first four months this year. Operating revenue fell 6.4% to 1.04 trillion yuan during the same period.

China's state-owned power giant Huaneng Group said in a notice issued on July 7 that it will tighten the screw on spot purchases of domestic thermal coal, given the benchmark price has been rising rap

As the rainy season in southern China restricted the demand for construction steel, rebar and wire rod prices ran weak in late June, according to the latest data from the National Bureau of Statistics

Out of 144 overseas power projects Chinese companies participated in over the first half of 2020, 27 projects are located in Myanmar, accounting for 18.8% of total, making the southeastern Asian count

Despite hardships and headwinds due to the outbreak of COVID-19 in China, Huadian Coal Industry under China Huadian Corporation has achieved encouraging results in the first half of 2020, according to

The Indonesian government set its coal benchmark price (HBA) for July at $52.16/t, down from $52.98/t last month, the Energy and Mineral Resources Ministry said in a statement on July 3.

Thermal coal prices moved up rapidly at northern Chinese ports late this week, on the back of revived market confidence for higher buying demand and tight supply. Prevailing offers for 0.

Chinese customs temporarily stopped customs clearing services for coking coal imports at Jingtang port in northern China's Hebei province, as its quotas for the whole 2020 have been almost used up, so

The Japanese government is looking to suspend or shutter nearly 90% of its older, inefficient coal-fired power plants by fiscal year 2030 in what would be a major turning point for the country's energ

Offer prices of Indonesian thermal coal prices nudged lower on July 3 in the Chinese seaborne import market due to the poor demand curbed by a lack of import quotas. Market participants surmised the d