The proportion was a marginal increase from 69.19% in January-March.

China's raw coal production totaled 1.15 billion tonnes during the same period, a year-on-year increase of 1.3%, which compared with a 0.5% reduction in January-March, data showed. 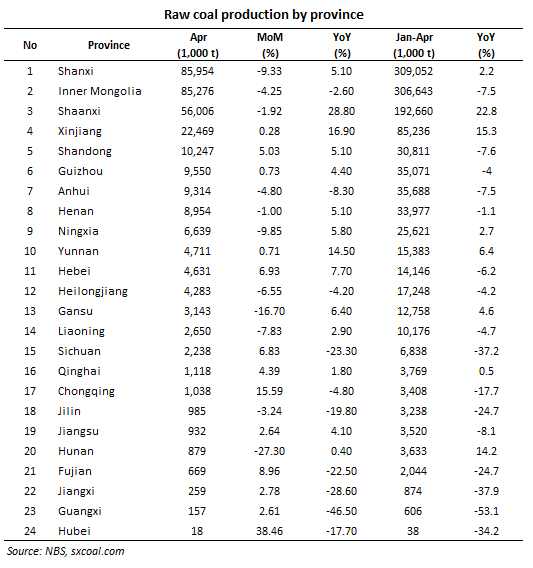 Followed was neighboring Inner Mongolia region with 306.64 million tonnes of raw coal output over January-April, down 7.5% year on year, taking 26.61% of China's total.

Shaanxi province in northwestern China contributed 192.66 million tonnes of raw coal output or 16.72% of the country's total in the same period, up 22.8% year on year.

About 77.54% or 893.59 million tonnes of China's raw coal output during January-April came from four provinces each with output above 50 million tonnes.

In April, China produced 322.12 million tonnes of raw coal, with a year-on-year growth slowing down from 9.6% from March to 6%. Daily output reached 10.74 million tonnes, a fall of 140,000 tonnes compared with the average in March.

Shanxi still ranked first in raw coal production last month, at 85.95 million tonnes, rising by 5.1% on the year, followed was Inner Mongolia with output down 2.6% from a year ago to 85.28 million tonnes.

Shaanxi's coal output surged 28.8% from the year prior to 56.01 million tonnes in April, which was the fastest yearly growth among all the provinces and regions in the country.

Chinese seaborne import thermal coal market remained flat similar to the past few days, as no power plants renewed tenders and traders stood on the sidelines. The best offer for a July-de

Chinese spot thermal coal prices are expected to stay range-bound in the near term, alongside a stalemate between sellers and buyers resulted mainly from market uncertainties. One Shanxi-

4 China May thermal coal market: prices up on increased demand and tightened supply 2020-06-03

China's thermal coal market trended up in May, bolstered by recovered demand and contracted output at coal mines amid safety and environmental regulations, low railings to northern ports amid maintena

China has raised the target for share of renewable power in the country's total power consumption for 2020, according to a statement jointly issued by the National Development and Reform Commission an

China will have more than 30 new ultra high-voltage (UHV) power transmission lines approved by 2025, driving 587 billion yuan of investment into the industry, according to a report issued on June 2.

Australia's coal exporters are bracing for a slump in shipments to China, making it somewhat ironic that May is likely to be the strongest month in nearly two years for Chinese imports from Down Under

Spot prices of Chinese domestic thermal coal are expected to fall in the near term, as demand from utilities has been weakening. Data from sxcoal.com showed the daily coal burn at China's

China's coking coal prices have been leveling off these days after touching a 34-month trough on May 20, bolstered by downstream restocking and production cuts during the "Two Sessions" (May 22-28).