At present, China has imposed strict restrictions on coal imports. It's learned that coastal areas like Fujian, Guangxi and Guangzhou have curbed seaborne coal imports to varying degrees, but coal arrivals at Chinese ports showed these restrictions not yet to have a significant impact.

Sxcoal.com has learned that Fuzhou Maritime requires foreign ships to stay in quarantine for 14 days before berthing, in order to prevent new imported coronavirus cases from entering China. Only local end users are allowed to declare customs at Fangcheng and Qinzhou ports in Guangxi.

However, Kpler's ship-tracking data showed seaborne coal arrivals (incl. a small amount of petcoke) totaled 18.42 million tonnes from March 1 to 22, a decrease of 1.2% from the same period last month; the average daily arrival volume was 840,000 tonnes, a slight fall of 1,300 tonnes compared with the same period in February. In addition, there are approximately 8 million tonnes of cargoes in transit. 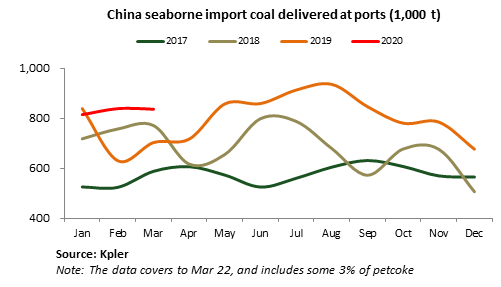 It can be seen from the above data that although there's a decline in seaborne coal arrivals in March, it is rather small and nearly negligible in a time of flat demand from slowing resuming downstream sectors and seasonal weakness in demand.

In fact, China has tightened import control since the Spring Festival break in late January. Even so, there was still a sharp increase in coal imports. Chinese customs data showed coal imports in January-February reached 68.06 million tonnes, a year-on-year increase of 33%.

The surge in the first two months was mainly due to the sudden tightened restrictions at the end of 2019, which caused a large accumulation of imported coal waiting for customs clearance at ports. Entering 2020, curbs eased and a large amount of coal cargoes passed customs clearance in a short time.

In recent years, imported coal has gradually become an important regulator for the domestic coal market, stabilizing coal prices and ensuring the balance between coal supply and demand.

The sharp increase in coal imports will squeeze the space for domestic coal demand, weaken the bonus left by the government's supply-side structural reform, and aggravate the contradiction between supply and demand in the domestic coal market. To this end, it's necessary to tighten coal imports appropriately.

Recently, import policies have gradually been tightened. Import quotas for large power groups have decreased by 20-30% compared with last year. Some power plants have reduced their quota by nearly half.

Some traders told sxcoal.com that the restrictions could be further tightened, as the rapid growing import is overdrawing the quotas in advance.

In addition, Kpler's data showed there were about 6 million tonnes of the delivered seaborne coal completed loading in March, or 1/3 of the total delivered coal over March 1-22, while most arrivals were loaded in February, accounting for 60%. This means that nearly half of the month-to-date arrivals were transacted in February, the worst period for virus epidemic in China.

During the period when domestic production was severely affected, coastal power plants replenished a large amount of imported coal, weakening the role of restriction policy in China's coal imports.

However, due to high coal inventory, coastal power plants are currently not active in purchasing overseas coal. Incidentally, there are not many Australian coal cargoes available for April loading, and offers are temporarily stable; Indonesian coal price has fallen near the break-even level. Coupled with the epidemic situation and the approaching of Ramadan, miners are keeping offer prices firmly.

In addition, factors such as fluctuations in global shipping freight rates and depreciation of Chinese yuan have increased the cost of imported coal, which has caused price gaps to narrow slightly between domestic and foreign cargoes.

"Many importers dare not take positions recently, in part because low demand and bearish expectations about the near-term market," said a domestic importer. "Due to the recent sharp drop in oil prices, the cost of mining operation in Indonesia has decreased. If demand doesn't improve, there will be a bigger downward risk."

In the short term, import restrictions would have limited impact on the market. However, as industrial enterprises in the south, like cement and steel mills, resume production, those heavily depending on imported coal as raw materials will be affected. They may have to increase purchases of domestic coal instead.

As the domestic epidemic situation is gradually contained in China, domestic coal supply has been largely restored to the same level as in previous years, while domestic demand continues to be sluggish. Therefore, demand for imported coal may decline to some extent.

China's metallurgical coke demand will be increasingly under downside pressure in the second half of the year, as major steel production areas may do step up efforts to reduce output other than just k

Thermal coal Production area Thermal coal supply remained tight, as coal production was strictly in line with the approved capacity and some coal mines in Ordos halted production for exhaustion

A batch of small-and-medium private coal mines were ordered to suspend operation for safety inspections in northwestern China's Shaanxi province, following a coal mine accident in mid-July, leading to

Indonesia's coal production reached 286 million tonnes in the first six months this year, only 45.76% of its annual target of 625 million tonnes, said the Ministry of Energy and Mineral Resources (ESD

The less precipitation in China this year may render hydropower unable to live up to expectation of delivering more power to ease the supply pressure on coal-fired power plants. Chi

The majority of Chinese provinces and regions posted yearly growths of thermal power generation in the first half of 2021, reflecting the large power consumer's reliance on coal-fired power especially

Finance allocated to clean-energy globally only accounted 2% of the $16 trillion in total fiscal support for economic stimulus in respond to the COVID-19 crisis, the International Energy Agency said i

China's major ports and utilities expedited thermal coal shipment and unloading, as the Super typhoon In-fa is heading toward the eastern China and will likely impact Zhejiang and Fujian, major coal c

China's National Development and Reform Commission, the country's top economic planner, has ordered power plants to build their coal inventory to the equivalent of at least seven days of consumption b

The unprecedented heavy rains that hit a wide range of areas in China, particularly Henan province in central China, have affected coking coal production and delivery in some areas, dragging down coal

There would likely be a new peak if China's coal consumption continues to grow this year, said BP's chief Economist Spencer Dale at a media interview for Statistical Review of World Energy 2021 on Jul

China is expected to remain a big purchaser for non-Australian premium coking coal in the second half of the year, as domestic supply is unlikely to meet expanding demand for high-grade coal, even as

China will increase more than 200 million tonnes per annum (Mtpa) of advanced coal production capacity in this year, as part of efforts to strengthen coal supply and better respond to surging demand i

China's coal imports posted their strongest year-on-year and month-on-month growth so far in June. The country imported 28.39 million tonnes of coal last month, up 12.3% or 3.11 million tonnes from a

With an "on-and-off" upward trend since late May, Indonesian thermal coal prices have been setting record highs, mainly driven by strong and steady demand from China, but the demand could weaken in th

China's daily electricity consumption created a new record of 27.19 TWh on July 14, surging more than 10% from the peak level of last summer and adding more pressure on power and coal supply.

Many vessel owners were heard to be reluctant to fetch coal from Indonesia for fear of being infected by the Delta variant of COVID-19, which was roaring in Indonesia and other Southeast Asian countri