Evolving energy and coal policies in China, the world's top energy user and the largest producer and consumer of coal, are impacting both domestic and global coal markets significantly, said Sarah Liu, vice president of Fenwei Energy Information Services, at the 6th International Mining and Resources Conference (IMARC) in Melbourne on October 31. 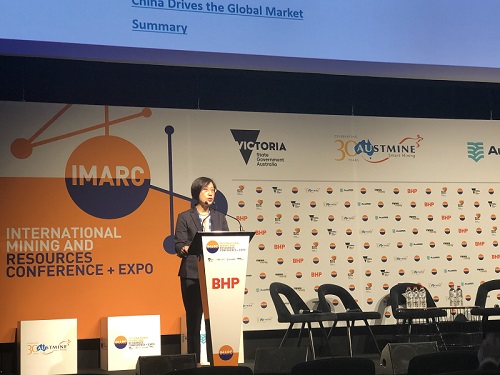 IMARC is Australia's largest mining event, bringing together over 300 leaders of global mining companies, 7000 participants from more than 100 countries. Industry portal sxcoal.com, run by Fenwei Energy, is the only media partner of IMARC in China.

It is important to keep a close watch on China's policy as China is such a big market and a 1-2% change in its supply-demand will have significant impact on both domestic and global markets, Sarah said during her presentation.

China's energy and coal market is a policy-driven market, and the related market supply-demand, import-export and prices are all greatly affected by the policy, she said, while elaborating on key policies including the energy policy, supply-side reform, safety and environmental protection, and import regulations.

China has been working to restructure energy structure, controlling energy consumption and consumption intensity, and building a clean energy industry system, aiming to reduce coal to less than 58% and increase non-fossil energy to 15% of its energy mix by 2020.

Now, the focus of supply-side reform is shifting to "build and release high-quality capacity", contributing to rapid recovery in coal production, according to Sarah.

This year, the Chinese government accelerated approval of new coal mine construction projects. Around 73% of the new capacity is thermal coal, and 90% of the new capacity comes from northern and western China - Inner Mongolia, Shanxi, Shaanxi, and Xinjiang, according to Sarah.

"Along with the increase of effective capacity, coal output is recovering rapidly," she said. "Yet, coal production has been affected by safety inspections to a certain extent, as illegal and noncompliant operations still exist."

On the demand side, coal consumption of downstream sectors has been negatively affected by the government's battle against air pollution, she noted.

Pollution control is one of the top three tasks of the Chinese government, with a three-year blue sky action plan as the most important guidance. The main measures include capping coal consumption in key areas, reducing scattered coal consumption, coal trucking restriction and off-peak production in energy-intensive industries during heating season.

By 2020, total coal consumption in Beijing-Tianjin-Hebei and surrounding areas will decrease by 10% from 2015, down 5% in Yangtze River Delta, and negative growth in Fenwei Plain including Henan and parts of Shanxi and Shaanxi, two of China's biggest coal-producing provinces.

Moreover, newly-added capacity in energy-guzzling and resource-intensive industries is not allowed unless for capacity replacement – new and high-quality capacities to supplant backward ones at no increase of capacity.

China has shifted to a net coal importer from coal exporter since 2009, and its coal import demand remains strong, with imports continuing rising this year despite various restrictions, Sarah stated. 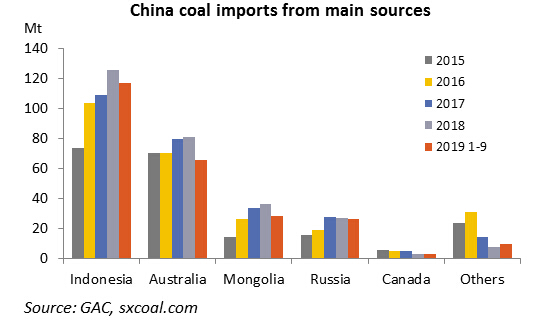 China plays a decisive role in the change of seaborne market prices. This is determined by the fact that China is a marginal buyer and Chinese buyers are highly price sensitive, constantly comparing the price gap between seaborne and domestic coal.

According to Sarah, the price pattern between China and seaborne market is more typical in coking coal. The CFR price of seaborne hard coking coal usually fluctuates around China's domestic market price, between the VAT-excluded and VAT-included prices of similar quality domestic coal at Jingtang Port.

Import restrictions will be in place for a relative long time, and flexibly adjusted based on domestic coal supply and demand situation, with the main purpose to ensure import volumes at a reasonable level, to fill the domestic supply gap but not to compress domestic supply seriously, she added.

Yuyang district, Yulin city in northwestern China's Shaanxi province has planned to carry out concentrated rectification on safe production at 19 private coal mines in the district to further strength

Russia exported 71.30 million tonnes of coal in total over January-May, down 9.25% from 78.57 million tonnes in the same period last year, according to preliminary statistics from the Energy Ministry

Coal stockpiles of Qinhuangdao port, China's top transshipment pivot of the fuel from North to South in the Bohai Bay, were hovering around at a low level despite a small pickup recently.

Coal mining center Shanxi province decided to shut down more small-scale coal mines permanently by the end of this year, as part of its effort to enhance coal mine safety conditions and lift concentra

China's coking coal miners saw a slide of inventories amid recent resilient sales, bolstering prices to recover from a downside that had lasted for three months. Buying enthusiasm of coki

Lower offers of Indonesian low-colorific value thermal coal were seen in the Chinese seaborne import market, as buying interest was curbed by concerns of quota shortage. The most-active 3

The long-awaited June term contract pricing by China's top miner CHN Energy came out with a big hike near late this week, the impact of which, however, remained unclear as to the spot market.

Thermal coal Production area Coal sales were relatively smooth in northern Shanxi, and prices kept stable. Some miners in Shaanxi and Inner Mongolia were in suspension amid safety crackdowns and

The intensified safety and overproduction inspection in Shaanxi and Inner Mongolia is likely to continue bolstering thermal coal prices at main production areas in the short run. Shaanxi,

Chinese spot thermal coal market remained quiet at the beginning of this week, amid rising bearishness among participants that prices could fall back in the short run. The soured outlook

Manufacturing activity in China rebounded in May driven by a jump in output as companies resumed production after the coronavirus lockdown in the first quarter, indicating the nation's recovery from t

Russian Railways has halted passenger and cargo rail transport between the northern port of Murmansk and the rest of Russia after the collapse of the only railway bridge linking the two, the national

Chinese seaborne import thermal coal market remained flat similar to the past few days, as no power plants renewed tenders and traders stood on the sidelines. The best offer for a July-de

Chinese end users have eased up on purchase of domestic thermal coal since last week, due to a lack of market clarity relating to term contract prices for June and supply-demand situation.

China will have more than 30 new ultra high-voltage (UHV) power transmission lines approved by 2025, driving 587 billion yuan of investment into the industry, according to a report issued on June 2.