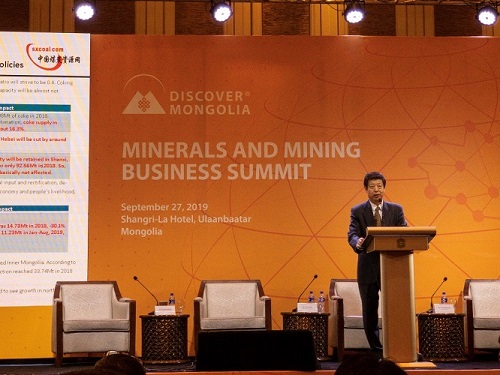 There is great possibility that exports of Mongolian coking coal to China will further pick up in the future, benefiting mainly from active efforts made by the Mongolian government, steady demand in China, and the newly commissioned Haoji railway, Chang said at the Minerals and Mining Business Summit held in Mongolia's capital city Ulaanbaatar on September 27.

The summit, the 17th annual Discover Mongolia conference, was organized by the Ministry of Mining and Heavy Industry, the Business Council of Mongolia and the Mongolian National Mining Association.

Chang was invited to give a speech on the Chinese and Mongolian coking coal market at the summit, which was co-organized by sxcoal.com, an industry portal run by Fenwei Energy.

Construction of a rail project from Tavan Tolgoi mine to Gashuun Sukhait border crossing in southern Mongolia was restarted officially on August 15 this year after years of halt, and is scheduled to complete and put into use by 2021.

This will help Mongolia deliver over 30 million tonnes of Mongolian coking coal to China each year at much lower transport cost compared to current truck shipment, said Chang.

Other railways will also be built to move coal from Tavan Tolgoi mine to Sainshand and more eastward to Choibalsan in Mongolia, Mongolian media reported earlier. This will help move more Mongolian coal into three Chinese border crossings – Ganqimaodu, Ceke and Mandula – in Inner Mongolia autonomous region.

The Mongolian government even planned to transport its coking coal to Caofeidian port, one major coking coal transfer port in northern China, for export to the international market.

Mongolian coal will also be transported to central Chinese consumption areas via Haoji railway, which has a designed transport capacity of 200 million tonnes per year, Chang pointed out.

China's coking coal consumption layout is undergoing changing, according to Chang. Hebei in northern China and Shandong in the eastern part of the country have been shedding backward coke-making capacity in response to the government's call for cleaner skies.

As more capacities are being closed in the Beijing-Tianjin-Hebei region, northeastern provinces could see an increase in coke production, Chang noted, adding Inner Mongolia is far from reaching its full coke capacity of 42.19 million tonnes per annum.

China's coking coal imports from Mongolia may further grow to 30.9 million tonnes this year, Chang projected, while noting growth may slow down in 2020 impacted by limited expansion of demand.

China's coking coal consumption is estimated to rise by 3.5% from a year earlier to 544 million tonnes in 2019, said Chang, based on projected output of crude steel and pig iron at 970 million and 800 million tonnes, up 4.5% and 3% on the year separately. 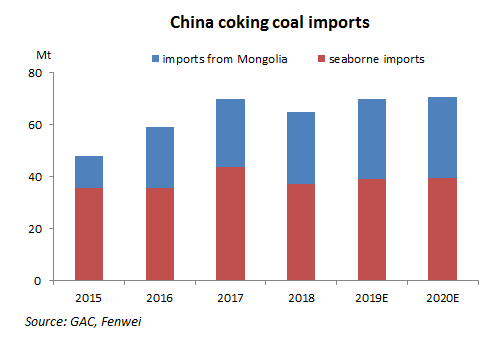 China produced 660 million and 540 million tonnes of crude steel and pig iron in the January-August period this year, expanding 9.1% and 6.9% year on year respectively, according to the National Bureau of Statistics.

Due to great differences in application value, Mongolian coal should be washed and processed to a deeper extent and more customer-tailored, in order to enhance competitiveness in the Chinese market, Chang noted at the summit.

"Fenwei Energy has been providing coal-related consultancy services to many Mongolian firms, and we look forward to work with more companies in tapping into the huge potentials in Chinese market, " he said.

Estabilished in 1998, Fenwei has developed the most comprehensive and exclusive China coal databases which cover the vertical industry chain. The Fenwei CCI index series are widely adopted by domestic and international companies in contracts signing and negotiation.

A sign of downward trend has been seen in the Chinese seaborne import thermal coal market with a pale end to the last week, possibly linked to the pickup in supply of domestic mines that weakened Chin

Coal companies controlled by the Chinese central government had put more than 95% of their capacity back into operation as of February 22, an official with the National Energy Administration said, in

Sea freight transport, the lifeblood of trade and a bellwether of the global economy, has been blown off course by the new coronavirus, sparking general alarm. As analysts pore over chart

Coal inventories at Qinhuangdao, key transshipment port in northern China, have recovered to above 5 million tonnes for the first time since early January, due to accelerated inbound arrivals followin

Yulin city, a major coal production city in northwestern China's Shaanxi province, had restored 75% of its total coal production capacity as of February 18, according to a news briefing on the same da

Market participants held different opinions about the direction of Chinese domestic thermal coal market from late February to early March, mainly focusing on the debate over whether recovery in the su

Thermal coal prices continued edging up in Shaanxi, the third-largest coal production base in China, as end buyers were scrambling to buy the material in an undersupplied market. In Yulin

Indonesian thermal coal held steady for sessions despite a marked decrease in Chinese demand, as the material remained supported by local heavy rains that have caused prolonged supply woes.

Spot thermal coal prices were little changed at China's northern transfer ports on the first trading day this week, as the sentiment turned weaker after domestic supply showed a sign of recovery.

Coking coal supply has been on the fast track to approach a full-scale recovery in China's main production areas recently, as a majority of miners gradually resumed operation after finishing approval

Coking coal market further gained strength at China's main production areas during the past week, as coal supply still far fell short of demand due to slower-than-expected resumption at mines and inte

Russia posted a year-on-year decline of 1.53% in coal exports in December 2019, according to customs data, mainly dragged down by decreased buys from China. The country shipped a total 18