Haoji railway, China's longest heavy-haul coal railway spanning 1,814.5km from northern to central and eastern areas, is scheduled to go into operation on September 24, reported Jiangnan City Daily based in the eastern province of Jiangxi. 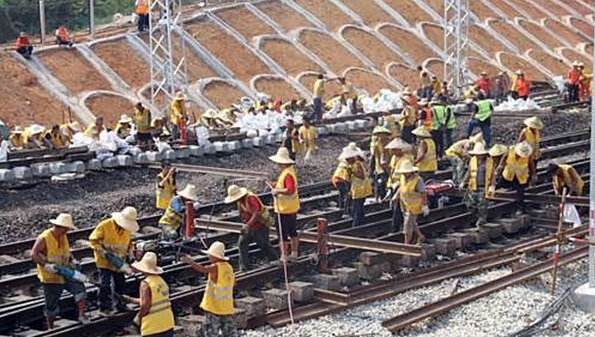 The railway, which starts from Haolebaoji of Inner Mongolia to Ji'an of Jiangxi province, will start operation one week earlier than original goal of October 1, thanks to workers' strenuous efforts, said the report.

Upon operation, Haoji rail line is expected to deliver coal from the main production base of Inner Mongolia across Shaanxi, Shanxi to central provinces like Hubei and Hunan.

The rail artery has a designed transport capacity of 200 million tonnes per annum.

Market sources said rail authorities set a fixed freight rate of 0.2 yuan/t.km for Haoji railway for shipment in the fourth quarter this year, which will translate to 210 yuan/t, 285 yuan/t and 325 yuan/t for coal delivery to Denghu, North Jingmen and Jiangling in Hubei province from North Jingbian in Shaanxi province.

As the first heavy-haul coal railway in China, Daqin (Datong of Shanxi-Qinhuangdao of Hebei) line came on stream on December 21, 1992. It has a length of 653km.

In 2018, a total 451 million tonnes of coal was transported through Daqin line, bringing the accumulated volumes to 6 billion tonnes since commissioning.

Spot prices of Chinese domestic thermal coal ended a rising streak that has lasted for two weeks, as market sentiment weakened on concerns of falling demand in June when hydropower is expected to p

Coking coal market remained on the downside at main production areas in China during the past week, with prices sliding by an average of 47 yuan/t at coal mines surveyed by sxcoal.com. Coal mines that

Chinese spot thermal coal market remained quiet at the beginning of this week, amid rising bearishness among participants that prices could fall back in the short run. The soured outlook

Thermal coal Production area Control on coal invoices remained strict in Inner Mongolia, and some mines had limited quotas in end-May, so they had to reduce or halt production, pushing up coal

China's coastal coal shipping market was on a losing streak in the week ending May 29, mainly hit by soured demand. Coastal power plants slowed down coal shipment from northern ports as c

Manufacturing activity in China rebounded in May driven by a jump in output as companies resumed production after the coronavirus lockdown in the first quarter, indicating the nation's recovery from t

Raw coal output from member companies with China National Coal Association amounted to 840 million tonnes in the January-April period, a rise of 0.7% year on year, showed data from the association.

China's factory activity grew at a slower pace in May but momentum in the services and construction sectors quickened, pointing to an uneven recovery in the world's second-largest economy as businesse

Month-long maintenance to China's coal-dedicated Daqin railway, which ended on May 28, two days ahead of schedule, has exerted limited impact on China's coastal thermal coal market, due to still weak

Trading prices of Indonesian thermal coal were seen at a slower rise in Chinese import market in the middle of this week, as some end users held back on buying amid "wait-and-see" sentiment toward dom

China's coal mining hub of Shanxi province aims to halve its coal-washing capacity to 1.8 billion tonnes a year and reduce the number of plants involved in the process to 1,200 by end-September, the a

Traders are beginning to accelerate sales with reduced offer prices in the Chinese domestic thermal coal market on May 27, as they have felt a sense of downward risk after downstream buyers slowed dow