The Indonesian Energy and Mineral Resources Ministry has set the country's coal reference price known as coal benchmark price (HBA) at $65.79/t for September, which hit a three-year's low since September 2016, spokesman of the ministry Agung Pribadi said on September 9.

The HBA dropped down from $72.67/t for August, the spokesman said. 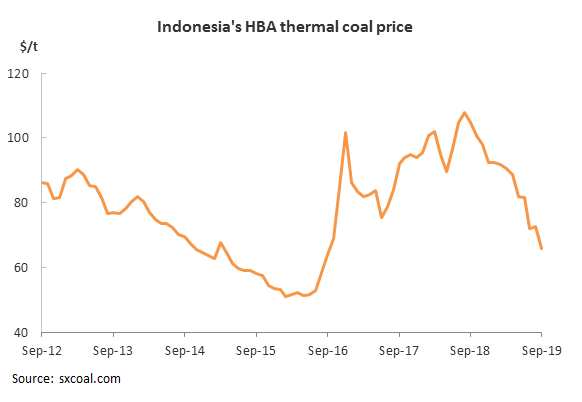 Global economic uncertainty amid weakening demand from Europe has eroded exports of one of Indonesia's major exported products, Agung said.

The HBA price for thermal coal is the basis for determining the prices of 77 Indonesian coal products and calculating the royalty producers have to pay for each metric ton of coal sold.

The Southeast Asia's biggest economy is the world's largest exporter and producer of thermal coal. Indonesia's coal reserve is estimated at 26.2 billion tonnes, according to the ministry.

Thermal coal Production area In Inner Mongolia, some coal mines suspended operation as their "coal sale quotas" have run out. Limited supply resulted in a small price rise at these mines.

The supply of coal to the power sector by state-owned Coal India has dropped 22% to 31.95 million tonnes in April amid slump in the fuel demand in the country on account of COVID-19-induced lockdown.

Weakening sentiment among Chinese end users is slowing trading activity of Indonesian thermal coal, hitting miners at a time when demand from other major buyers has been heavily hit by Covid-19 pandem

China said on May 22 it will bolster the capacity of the country's energy reserves and offer lower gas and electricity charges to key industries, as it looks to ensure energy supply and offset the imp

China's Zhengzhou Commodity Exchange (ZCE) said on its website that it will roll out thermal coal options simulation trading on May 26 to prepare for real transaction. Thermal coal contra

After climbing fast for more than a week, Chinese domestic thermal coal market paused on May 26, as the bullish sentiment was dented by a drop in futures market and people started concerning risks of