Japan imported 10.7 million tonnes of thermal coal (including bituminous and sub-bituminous coals) in January, increasing 10.1% year on year and up 13.13% month on month, hitting a new high since July 2015, the latest customs data showed. 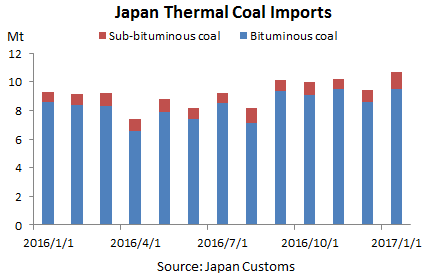 Australia remained the largest supplier to Japan with 8.06 million tonnes of the material, up 5.53% from the year-ago level and 17.83% from the previous month.

This was followed by Indonesia at 0.66 million tonnes, more than tripling from a year prior and up 46.3% from December.

The country's bituminous imports from Russia stood at 0.37 million tonnes, falling 28.59% compared to the same month a year prior and down 64.54% from December.

Indonesia, the top supplier of this material, shipped 1.04 million tonnes to Japan in January, more than doubling from the month prior and up 36.92 from a year ago, the highest since July 2015.

A sign of downward trend has been seen in the Chinese seaborne import thermal coal market with a pale end to the last week, possibly linked to the pickup in supply of domestic mines that weakened Chin

Coal companies controlled by the Chinese central government had put more than 95% of their capacity back into operation as of February 22, an official with the National Energy Administration said, in

Sea freight transport, the lifeblood of trade and a bellwether of the global economy, has been blown off course by the new coronavirus, sparking general alarm. As analysts pore over chart

Coal inventories at Qinhuangdao, key transshipment port in northern China, have recovered to above 5 million tonnes for the first time since early January, due to accelerated inbound arrivals followin

Yulin city, a major coal production city in northwestern China's Shaanxi province, had restored 75% of its total coal production capacity as of February 18, according to a news briefing on the same da

Market participants held different opinions about the direction of Chinese domestic thermal coal market from late February to early March, mainly focusing on the debate over whether recovery in the su

Thermal coal prices continued edging up in Shaanxi, the third-largest coal production base in China, as end buyers were scrambling to buy the material in an undersupplied market. In Yulin

Indonesian thermal coal held steady for sessions despite a marked decrease in Chinese demand, as the material remained supported by local heavy rains that have caused prolonged supply woes.

Spot thermal coal prices were little changed at China's northern transfer ports on the first trading day this week, as the sentiment turned weaker after domestic supply showed a sign of recovery.

Coking coal supply has been on the fast track to approach a full-scale recovery in China's main production areas recently, as a majority of miners gradually resumed operation after finishing approval

Coking coal market further gained strength at China's main production areas during the past week, as coal supply still far fell short of demand due to slower-than-expected resumption at mines and inte

Russia posted a year-on-year decline of 1.53% in coal exports in December 2019, according to customs data, mainly dragged down by decreased buys from China. The country shipped a total 18