China's coal imports hit a 23-month high of 26.97 million tonnes in November, up 24.96% from October and 66.56% from the year-ago level, showed data released by the General Administration of Customs (GAC) of China on December 8. 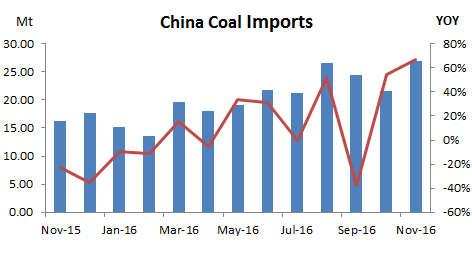 That was the highest monthly imports since December 2014 when the country imported 27.22 million tonnes of coal, and the year-on-year growth in November was also the largest in 2016.

The buying spree slowed in September and October, affected by released production at advanced coal mines and slack demand from downstream sectors.

In November however, the country's coal imports rise with utilities replenishing stocks to cope with higher winter demand, amid northern China's heating season, as well as southern China's sliding temperature.

Australian thermal coal offer prices continued with a rapid increase on the back of increased purchases from Chinese buyers. High-ash 5,500 Kcal/kg NAR thermal coal for November and Decem

China's metallurgical coal market extended strength at major production bases late this week, and prices of multiple coal grades are likely to climb higher or hold steady in the near term.

Thermal coal Production area All preparation plants in Yuyang district, Yulin, Shaanxi province was temporarily shut down and banned to buy coal yesterday. The time when their operation cou

China issued an action plan to subsidize newly-commissioned biomass power plants in order to boost development of the renewable sector and reduce emissions. The central government will ap

India's thermal coal imports in the second quarter declined 41.5% from the same period a year earlier, as power demand was heavily hit during the COVID-19 epidemic. Some participants predicted India's

Some Chinese traders were seen ramping up restocking of Australian premium metallurgical coal lately on expectations that China, sourcing over half of seaborne met coal from Australia, may loosen its

Concerns over a retreat arose in China's spot thermal coal market, following slowed price growth as trades weakened late last week. There has been a visible standoff between coal buyers a

China's spot thermal coal prices have been increasing for more than a week, with the benchmark 5,500 Kcal/kg NAR grade already breaking through the upper limit of the "green zone". As of

China produced 325.81 million tonnes of raw coal in August, growing 2.48% from in July, showed the latest data from the National Bureau of Statistics (NBS) on September 15. The August raw

China's premium coking coal market continued to pick up in the middle of this week, as coke producers scrambled to restock the raw material to raise coke production on bullish outlook. Of

Coal exports from three terminals of North Queensland in Australia were back above 10 million tonnes in August after hitting the 18-month low in July, showed the latest data from North Queensland Bulk